Joe Biden received a boost of sorts Tuesday when longshot pragmatists attacked Sanders and Warren over their plans like Medicare for All and the Green New Deal. 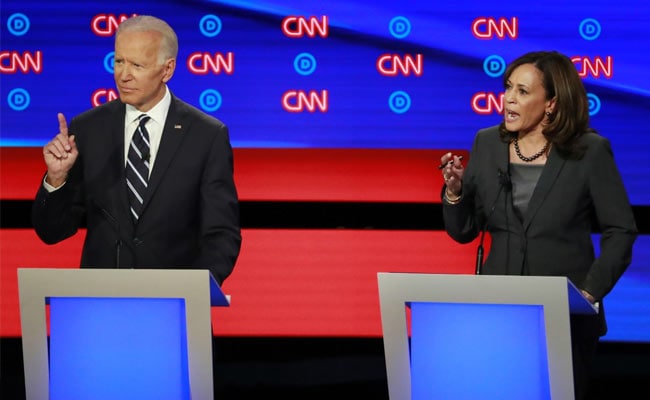 Joe Biden is polling far ahead of his rivals for the nod to take on Trump in 2020. (Reuters)

Moderate frontrunner Joe Biden and his 2020 Democratic rivals took the stage Wednesday ready for a dog fight but began their debate largely with cooler heads prevailing, uniting under a common goal of ousting President Donald Trump.

But tensions were quickly evident between Biden and Senator Kamala Harris, the most prominent African American in the field and who savaged him over race and criminal justice issues at their previous debate.

Their jousting was not over race in the second leg of the Democratic debate, however, but health care, with Biden quickly going after Harris and her "double talk" about her own modified Medicare for All plan.

It was a crisp opening salvo to a debate where fireworks are expected, one night after the debate between 10 other candidates exposed deep fault lines in the party between the progressive wing and centrists.

Several candidates joined with Biden in condemning the man currently in the White House.

"Mr President, let's get something straight," Biden said. "We love (this country), we are not leaving it, we are here to stay, and we're certainly not going to leave it to you."

Biden is polling far ahead of his rivals for the nod to take on Trump in 2020, and his priority is to maintain his pole position and appear presidential, while fending off the attacks that were bound to come his way.

He was under pressure to come out re-energized and surefooted, poised to counterpunch against Harris, who got under Biden's skin in their first clash.

But even as his advisors urged him to be more aggressive at Wednesday's debate after his lackluster performance last month, Biden, 76, took a curious first step.

Moments before the debate began, as Harris walked on stage, Biden greeted the 54-year-old former California attorney general by shaking her hand, grinning and saying, "Go easy on me kid."

As on Tuesday, progressive candidates highlighted the divisions on stage.

"Middle ground approaches are not enough," said Washington Governor Jay Inslee, whose singular issue is climate change and has released a trillion-dollar plan to tackle it.

"We must confront the fossil fuel industry," he added.

'Tax the hell out of wealthy'

New York Mayor Bill de Blasio, in the far left lane in the race, laid down the gauntlet demanding bold change, saying he was fully prepared to "restructure society."

"We will tax the hell out of the wealthy," he boomed.

On Tuesday, intense debate exposed deep fault lines between the party's progressive wing led by candidates Bernie Sanders and Elizabeth Warren, and centrists who warned that overzealous liberal policies would turn off millions of voters across America.

Biden received a boost of sorts Tuesday when longshot pragmatists attacked Sanders and Warren over their plans like Medicare for All and the Green New Deal.

Sanders and Warren are Biden's closest challengers, and the repeated attacks fired off by also-rans saved Biden from having to launch such divisive frontal assaults himself.

Tuesday marked the most sustained attack yet on the bold platforms proposed by Sanders and Warren.

Low-polling candidates on the stage like de Blasio, Inslee, Senator Kirsten Gillibrand and entrepreneur Andrew Yang are desperate for breakout moments to boost their exposure and justify staying in the race, but few were evident.

The stakes for this debate round are high, with the 20 candidates likely to be winnowed by as much as half ahead of the next showdown in September.

Biden maintains that expanding health care for all Americans is vital, and the plan he recently rolled out would expand on the 2010 Affordable Care Act enacted during his and president Barack Obama's tenure.

But he has cast Medicare for All as an effort to scrap Obamacare, and in that way he has drawn sharp contrasts with Sanders and Warren, who back a single-payer plan to insure every American.

"Obamacare is working," said Biden, who has slammed Medicare for all as an unrealistic program that will cost 30 times as much as his plan.

Divisions also emerged on immigration, trade, taxes, and how to tackle climate change.