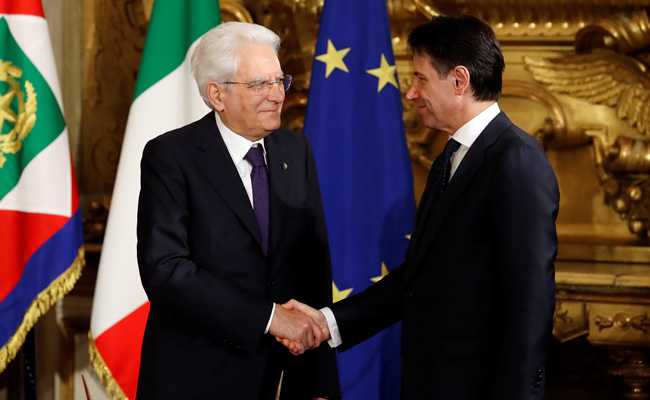 Conte, a little-known 53-year-old law professor, is backed by the 5-Star Movement which grew out of a grassroots protest network, and the right-wing League who have issued a budget-busting agenda of sweeping tax cuts and higher welfare spending.

The government was formed after three months of political deadlock following inconclusive March 4 elections, with the pre-election rivals striking a last-minute deal on Thursday to avert a fresh vote in high summer amid growing market turmoil.

Widespread voter disenchantment has seen anti-establishment parties upset mainstream politics across the continent, including Germany and France, but it is the first time they will run the government of a major western European country.

Conte made no comment to reporters after his swearing-in ceremony in the president's 16th century palace in Rome, in a room with a huge gilt mirror flanked by Italian and EU flags.

"I admit that I am choked up and happy," League leader Salvini said in a tweet which showed him for once formally dressed with his top shirt button done up for the occasion.

5-Star and the League have a solid majority in both houses of parliament, where the government will now face confidence votes early next week in order to be fully empowered.

Italy hosted the European Union's founding Treaty of Rome 60 years ago, but the once enthusiastically pro-EU Italians have progressively become disenchanted with Europe, blaming its fiscal rules for two decades of economic stagnation.

The disaffection has grown in recent years as hundreds of thousands of migrants have landed on Italy's shores from north Africa, fuelling support for the League which accuses the EU of abandoning Italy to deal with the influx on its own.

Italy's future in the euro zone has dominated the political uncertainty of the last week, with President Sergio Mattarella vetoing the coalition's original choice for economy minister, the eurosceptic economist Paolo Savona.

That sparked a breakdown of the coalition's first attempt to form a government and a furious reaction from the coalition leaders.

Ironically, after the swearing in at the Quirinale Palace, politicians who early this week were calling for Mattarella's impeachment will mingle with him at a reception in its manicured Renaissance gardens to mark the Feast of the Republic.

Financial markets, which sold Italian assets heavily early this week, have recovered in the last two days. Italy's blue-chip share index was up more than 1 percent on the day and Italian bond yields fell.
© Thomson Reuters 2018

(Except for the headline, this story has not been edited by NDTV staff and is published from a syndicated feed.)
Comments
ItalyItaly electionItaly PM