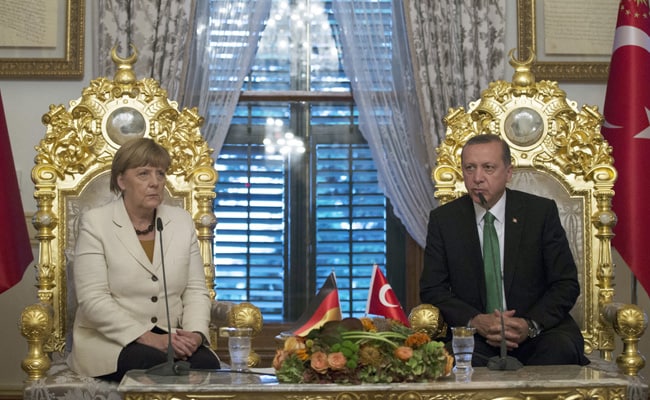 The move by the parliament, in a final vote last Friday, is likely to sideline the pro-Kurdish opposition and ease Erdogan's path to stronger powers.

Speaking after talks with the Turkish leader in Istanbul, Merkel said: "I've made this clear in the conversation today that I also think we need an independent judicial system. We need independent media and we need a strong parliament."

Saying the decision to withdraw the immunity of lawmakers caused deep concern, Merkel said: "I've made this clear to the Turkish president.

She said she and Erdogan had talked about this openly but she still had some unanswered questions and she would follow developments in Turkey closely.

Erdogan's opponents say the move to lift parliamentarians' immunity is aimed at pushing the pro-Kurdish HDP, parliament's third-biggest party, out of the assembly.

Erdogan has accused the HDP of being the political wing of the Kurdistan Workers Party (PKK) which has waged a three-decade insurgency in Turkey's largely Kurdish southeast and said he wants to see them prosecuted. The HDP denies such links.

The PKK is considered a terrorist organisation by Turkey, the United States and the European Union.

Merkel said she and Erdogan had discussed Turkey's campaign against the PKK and the rights of minorities.

"I've made clear that the fight against PKK is right and necessary, but on the other hand everything must be done so that people of Kurdish origin get a fair chance in Turkey, that they can participate when it comes to wealth and development of the country," she said.

Merkel also said that Turkey needed to fulfill all of the conditions set by Brussels before its citizens can get visa freedom in the European Union. Turks were due to get visa-free travel in the EU in return for stopping the flow of illegal migrants to Europe as part of a deal between the EU and Turkey.

She said it did not look like all of the conditions for visa freedom would be met in the coming weeks.

"It's foreseeable that some things won't be able to be implemented by July 1, namely visa freedom because the conditions are not yet fulfilled," she said.
© Thomson Reuters 2016