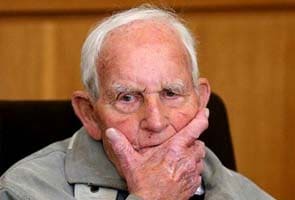 Hagen: Germany put a 92-year-old former member of the Nazi Waffen SS on trial today on charges that he executed a Dutch resistance fighter in 1944.

Dutch-born Siert Bruins, who is now German, volunteered for the SS after the Nazis conquered the Netherlands in 1941.

Bruins served as a member of the Sicherheitspolizei, or Security Police, in a unit looking for resistance fighters and Jews.

No pleas are made in the German legal system, and Bruins made no statement today about the accusations against him. His attorney said Bruins would answer questions during the trial but not about the charges.

"Our tactic will definitely be to keep silent with regard to the charges," attorney Klaus-Peter Kniffka said ahead of the trial.

Despite his advanced age, Bruins was found medically fit to stand trial, though Kniffka said the stress of the proceedings against him has weakened him.

Bruins, who already served time in prison in the 1980s for his role in the slaying of two Dutch Jews, is accused of killing resistance fighter Aldert Klaas Dijkema in September 1944 in the town of Appingedam, near the German border in the northern Netherlands.

If convicted, he faces a possible life sentence.

Dijkema, whose sister has joined the trial as a co-plaintiff, which is allowed under German law, was apprehended by the Nazis on September 9, 1944, on suspicion he was involved in the Dutch resistance.

According to prosecutors, Bruins and alleged accomplice August Neuhaeuser, who has since died, drove Dijkema a short time later to an isolated industrial area where they stopped and told him to "go take a leak."

As he walked away from the car, they fired at least four shots into him, including into the back of his head, killing him instantly, according to the indictment.

Bruins and Neuhaeuser reported that Dijkema was shot while trying to escape.

Promoted
Listen to the latest songs, only on JioSaavn.com
Because of Bruins' age, daily trial sessions are limited to three hours.