The "Medibus" is a complete doctor's office in a red and yellow bus that sets up shop in the community of around 1,000 people for a few hours on Tuesdays and Thursdays. 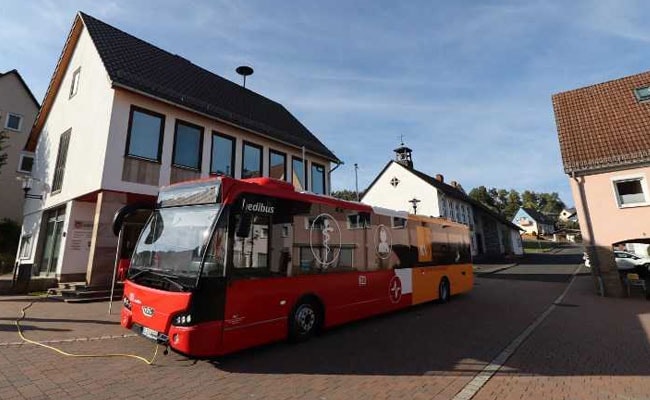 The Medibus mobile doctor's office in front of the town hall in Cornberg, central Germany. (AFP)

For years after the last doctor left the small German village of Weissenborn, 79-year-old former mayor Arno Maeurer had to rely on his car to reach the nearest clinic, as a chronic shortage of practitioners gripped his rural region.

But this year a clinic started coming to him.

The "Medibus" is a complete doctor's office in a red and yellow bus that sets up shop in the community of around 1,000 people for a few hours on Tuesdays and Thursdays.

"The day will come when I won't be able to drive any more, so I'll be totally dependent on the Medibus," Maeurer says. 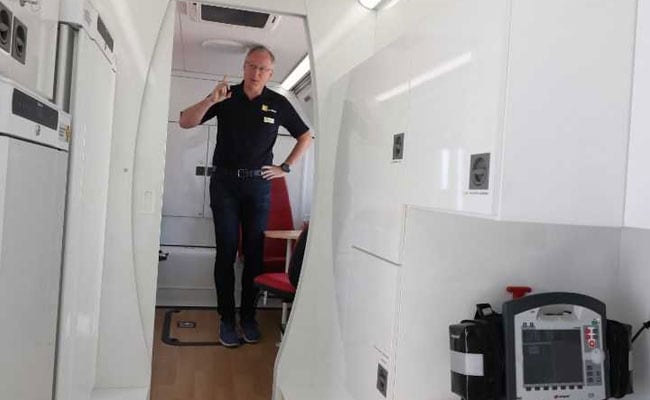 For the time being, he turns to the mobile practice now and then but still sees his doctor when he isn't completely booked up.

Every week, the bus, set up by the Hesse state medical association, stops off in six villages in western Germany.

As in many areas of western Europe, they are afflicted both by an ageing population and a scarcity of practitioners to take care of them.

On board the Medibus, doctor Matthias Roth saw around 35 patients a day in the summer months, or roughly the same number as a traditional GP's practice, the association says. Around 70 percent of the patients were more than 55 years old, and 30 percent older than 76.

"It's a full practice, we have everything on board to diagnose and care for patients," Roth tells news agency AFP, from his chair behind the tiny desk squeezed into the consulting room in the vehicle's rear.

Outside on the town square of Cornberg- population 1,600 project supervisor Carsten Lotz from the medical association declares the project a "very big success, we're very satisfied."

Across Hesse, more than 170 doctors' posts are unfilled, according to data from the medical association.

Even the offer of a bonus of up to 66,000 euros ($75,000) over five years to those setting up in specific areas has failed to lure enough new blood, while doctors delaying retirement are offered up to 2,000 euros per quarter.

The shortage is so acute that the Medibus received a special exemption from a general ban on itinerant doctors.

Fearing the initiative might speed up the growth of so-called "medical deserts", some local officials have resisted the bus, Lotz says.

"It's still our job to bring young doctors to the towns, the Medibus is just there as a top-up" where that isn't possible, he says.

For doctor Roth, it's "a good solution given what's available," even if it's "certainly not an ideal state of affairs".

"We aren't competing with local doctors," he adds.

While waiting for the "miracle" of a new permanent doctor arriving, former mayor Maeurer says the bus "must absolutely be kept going... it's better than nothing."

Managers for now plan to keep the Medibus going for two years at a total cost of 600,000 euros.

Europe-wide, the problem of medical deserts is spreading, with falling numbers of generalists, a wave of older doctors heading into retirement and their young successors looking for a more balanced lifestyle.

In the UK, the British Medical Association estimates there are around 2,000 patients for every GP, and rural areas struggle to lure young doctors away from the cities, a spokesman told news agency AFP.

The country's National Health Service (NHS) has offered bonuses of 20,000 pounds (22,500 euros, $25,500) to newly qualified practitioners setting up in the least attractive areas.

And in France, around eight percent of the population- 5.3 million people lives in one of the 9,000 municipalities judged to have an undersupply of doctors, according to the French government.

While France has a similar ban on itinerant medicine to Germany's, the medical association has authorised the practice in exceptional cases "in the interests of public health" with a first mobile unit planned in the central Auvergne-Rhone-Alpes region early next year.