Barbara Bush, 36, is the co-founder and chair of Global Health Corps. Coyne is an actor and screenwriter whose credits include "Jarhead" and "Snowtown." 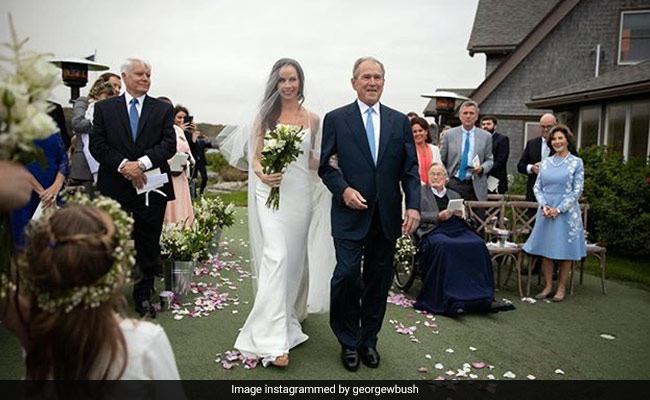 The Bushes said the wedding took place Sunday at the family compound in Kennebunkport, Maine.

Those were wedding bells we heard! Just hours after an Instagram photo added more fuel to the swirling rumors that former first daughter Barbara Bush had tied the knot, hush-hush style, her parents went and made it all official: "President George W. Bush and Mrs. Laura Bush are delighted to announce the marriage of their daughter, Barbara Pierce, to Mr. Craig Louis Coyne," read a statement released Monday morning by the family.

The Bushes said the wedding took place Sunday at the family compound in Kennebunkport, Maine.

And some details: "The bride wore an ivory silk crepe Vera Wang custom gown and was escorted by her father and grandfather. The wedding was officiated by the bride's aunt, Dorothy Bush Koch."

The lower-profile of the Bush twins (sister Jenna Bush Hagar is a co-host of the "Today" show) had started wedding rumors when reports surfaced that an invite was out for friends for a "celebration" of the couple on Friday in New York, where they live. And then on Sunday, there was a tease of an Instagram post on the account of SullyHWBush, the adorable Labrador owned by former president George H.W. Bush, the (possible) bride's grandfather.

The photo was taken by Paul Morse, who was the Bushes' photographer in the White House and has shot many family events since, including Jenna Bush Hager's wedding and the funeral of the twins' grandmother Barbara Bush earlier this year.

Barbara Bush, 36, is the co-founder and chair of Global Health Corps. Coyne is an actor and screenwriter whose credits include "Jarhead" and "Snowtown."