"There will be very tough times, made even more difficult by criticism you may not think is fair. I'm not a very good one to give advice; but just don't let the critics discourage." the senior Bush wrote to Bill Clinton. 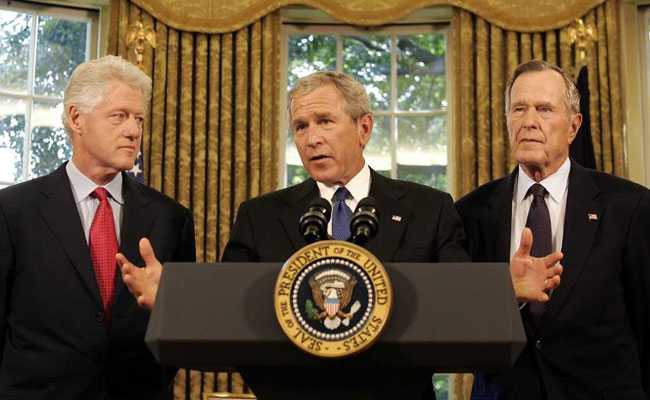 Many people were struck by George HW Bush's tone of humility and civility in the letter. (AFP)

George H.W. Bush felt the sting of winter cold in his last walk on the White House grounds as commander in chief, the January stroll punctuated by the barks from Ranger, the puppy of first dog Millie Bush.

The world's attention was focused on the steps of the Capitol, where Bill Clinton would assume the presidency. But Bush, who died Friday at 94, was taking in the last moments of his one and only term.

He sat in the Oval Office, the Resolute Desk stripped clean of documents and photos, Bush wrote in his memoir "All the Best, George Bush: My Life in Letters and Other Writings."

When I walked into this office just now I felt the same sense of wonder and respect that I felt four years ago. I know you will feel that, too.

I wish you great happiness here. I never felt the loneliness some Presidents have described.

There will be very tough times, made even more difficult by criticism you may not think is fair. I'm not a very good one to give advice; but just don't let the critics discourage you or push you off course.

You will be our President when you read this note. I wish you well. I wish your family well.

Your success now is our country's success. I am rooting hard for you.

The letter was one of the more famous dispatches by Bush, who has handwritten correspondences since his time as a Naval aviator in World War II.

After Bush's death, the letter to Clinton made rounds on social media, with many struck by its tone of humility and civility that many believe has all but vaporized in Washington.

"Although Mr. Bush served as president three decades ago, his values and ethic seem centuries removed from today's acrid political culture," The Post's Karen Tumulty wrote. "His currency of personal connection was the handwritten letter - not the social media blast."

The note left an indelible impression on Bill Clinton, who did the same for his successor - Bush's son, George W. Bush.

"I thought about the note to President Bush I would write and leave behind in the Oval Office," Clinton wrote in "My Life," a memoir. "I wanted to be gracious and encouraging, as George Bush had been to me."

On Saturday, after Bush's death, Clinton reflected on his predecessor's note in an op-ed for The Post.

"No words of mine or others can better reveal the heart of who he was than those he wrote himself," Clinton said.

"He was an honorable, gracious and decent man who believed in the United States, our Constitution, our institutions and our shared future. And he believed in his duty to defend and strengthen them, in victory and defeat. He also had a natural humanity, always hoping with all his heart that others' journeys would include some of the joy that his family, his service and his adventures gave him."

Letters to incoming presidents have become tradition. George W. Bush would also write a letter to Barack Obama, and in turn, Obama wrote a letter to Donald Trump. But for many who shared the note, it's the dignity and hope for George H.W. Bush's letter that is so strikingly anachronistic in 2018.

Bush was not ready to leave that note. He felt he did not finish the job, he wrote in his memoir. But Ranger had different plans.

"He starts barking at Millie and jumping like he does - He's barking 'let's go,' " Bush wrote about his last day in office. "He finally calms down and we walk around the whole circle, memories flooding back in."

(Except for the headline, this story has not been edited by NDTV staff and is published from a syndicated feed.)
Comments
George HW BushGeorge HW bush death