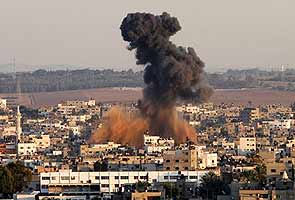 Gaza City, Gaza Strip: Palestinian militants targeted densely populated Tel Aviv in Israel's heartland with rockets for the first time on Thursday, part of an unprecedented barrage that threatened to provoke an Israeli ground assault on Gaza. Three Israelis were killed in a separate rocket attack in southern Israel.

Air raid sirens wailed and panicked residents ran for cover in Tel Aviv, Israel's commercial and cultural capital. Israel responded by moving troops and heavy weapons toward Gaza and authorizing the call-up of tens of thousands of reservists.

There was no word on where the two rockets aimed at Tel Aviv landed, raising the possibility they fell into the Mediterranean. A third rocket landed in an open area on the southern outskirts of Tel Aviv.

The fighting, the heaviest in four years, came after Israel launched a ferocious air assault on Wednesday to stop repeated rocket fire from Gaza. The powerful Hamas military chief was killed in that strike, and another 18 Palestinians have died over two days, including five children. Some 100 Palestinians have been wounded.

Israeli warplanes struck dozens of Hamas-linked targets in Gaza on Thursday, sending loud booms echoing across the narrow Mediterranean coastal strip at regular intervals, followed by gray columns of smoke. After nightfall, several explosions shook Gaza City several minutes apart, a sign the strikes were not letting up, and the military said the targets were about 70 underground rocket-launching sites.

Israeli Prime Minister Benjamin Netanyahu said the army was hitting Hamas hard with what he called surgical strikes, and warned of a "significant widening" of the Gaza operation. Israel will "continue to take whatever action is necessary to defend our people," said Netanyahu, who is up for re-election in January.

There were mounting signs of a ground operation. At least 12 trucks were seen transporting tanks and armoured personnel carriers toward Gaza late Thursday, and a number of buses carrying soldiers arrived. Israeli TV stations said a Gaza incursion was expected on Friday, though military officials said no decision had been made.

Defence Minister Ehud Barak said he authorized the call-up of reservists, and the army said up to 30,000 additional troops could be drafted.

"We will continue the attacks and we will increase the attacks, and I believe we will obtain our objectives," said Lt. Gen. Benny Gantz, Israel's military chief.

Hamas, meanwhile, warned it would strike deeper inside Israel with Iranian-made Fajr-5 rockets, acknowledging for the first time it has such longer-range weapons capable of hitting targets some 47 miles (75 kilometres) away. Tel Aviv is 40 miles (70 kilometres) from Gaza.

By nightfall on Thursday, Hamas said it had fired more than 350 rockets into Israel. Israel, which estimates Gaza militants have as many as 12,000 rockets, said some 220 rockets struck the Jewish state and another 130 were intercepted by an anti-missile shield.

Israel believes Hamas has significantly boosted its arsenal since the last Gaza war four years ago, including with weapons from Iran and from Libyan stockpiles plundered after the 2011 fall of the regime there.

"After four years, we became stronger, we have a strategy and we became united with all the military wings in Gaza," said Hamas spokesman Fawzi Barhoum, referring to Hamas' setbacks during Israel's last major offensive in late 2008.

In the current round of fighting, Israel is facing an emboldened Hamas with a stronger arsenal and greater regional backing. Egyptian President Mohammed Morsi, like Hamas a member of the region-wide Muslim Brotherhood, said he was sending a high-level delegation to Gaza on Friday in a show of support for the fellow Islamists there.

Both Israel and Hamas had largely observed an informal truce over the last four years, marred by occasional flare-ups. In recent days, however, border tensions escalated, then exploded into major violence Wednesday when Israel assassinated Hamas' secretive military chief, Ahmed Jabari, with a missile strike on his car.

Jabari led Hamas' 2007 takeover of the territory, turning small squads of Hamas gunmen into a fighting force and supervising Gaza's fledgling arms industry, including rocket production. He was long No. 1 on Israel's most-wanted list, particularly for his role in capturing Israeli Sgt. Gilad Schalit and holding him for more than five years.

On Thursday, Hamas gunmen fired machine guns in the air as frenzied mourners carried Jabari's body, wrapped in a white burial shroud, through the streets of Gaza City on a wooden stretcher. At the cemetery, young men surged toward the corpse, trying to touch Jabari's face before he was lowered into the grave in a chaotic scene.

Hamas' top leaders have dropped out of sight since the assassination, but it was not clear if they would be targets. The Hamas prime minister, Ismail Haniyeh, said in a televised speech Thursday that the group "will not forget and not forgive" the killing of Jabari.

Late Thursday, Hamas security said an Israeli navy vessel fired toward a building about 50 yards (meters) from Haniyeh's house, where a generator supplies electricity for the prime minister and his neighbors in Shati, a beach-front refugee camp in Gaza City. It was not clear if Haniyeh was home at the time.

In Israel, a rocket hit a four-story apartment building in the southern town of Kiryat Malachi on Thursday, killing two men and a pregnant woman. A four-year-old boy and two babies were wounded in the attack.

Many Gazans stayed indoors and streets were largely empty, though there was no sense of widespread panic. Some said Hamas should take revenge, even at the price of further Israeli retaliation.

"If Israel strikes us, we have to strike back," said Ahmed Barakat, a 33-year-old labourer from Gaza City attending the Jabari funeral. "An eye for an eye, a tooth for a tooth."

In Jerusalem, thousands of mourners attended the funeral of Mira Scharf, a 26-year-old mother of three who was killed in Thursday's rocket strike in Israel. Israeli media said she was pregnant and had recently returned to Israel from New Delhi to give birth.

In central Tel Aviv, Adrian Cisser, a 35-year-old electrician, was in a bicycle shop when an air raid siren went off.

"People on the street started running," he said. "The public shelter nearby was locked so we just stayed in the shop, and two minutes after it started we heard this big bang."

Cisser said he had gotten a preliminary call from the army and expects to be called up for reserve duty next week.

In the southern Tel Aviv suburb of Rishon Lezion, where a Hamas rocket landed in an empty field, a siren sent people rushing for shelter.

"There is panic in our house and we can hear shouts from the street," a resident who gave her first name, Lital, told the Israeli news site YNet. "Children were running away, trying to find shelter. It was very stressful. I am shaken up."

From Israel's perspective, Hamas escalated the fighting with a pair of attacks in recent days, an explosion in a tunnel along the Israeli border and a missile attack on an Israeli military jeep that seriously wounded four soldiers.

An Israeli ground offensive could be costly to both sides. In the last Gaza war, Israel devastated large areas of the territory, setting back Hamas' fighting capabilities but also paying the price of increasing diplomatic isolation because of the high civilian casualty toll.

The current round of fighting is reminiscent of the first days of Israel's three-week offensive against Hamas that began in December 2008. At the time, Israel also caught Hamas off-guard with a barrage of missile strikes and threatened to follow up with a ground offensive.

However, much has also changed since then.

Israel has improved its missile defence systems, but is facing a more heavily armed Hamas.

Netanyahu, who has clashed even with his allies over the deadlock in Mideast peace efforts, appears to have less diplomatic leeway than his predecessor, Ehud Olmert, making a protracted military offensive harder to sustain.

The White House came out in support of Israel on Thursday, with spokesman Jay Carney saying there is "no justification" for rocket fire from Gaza and urging militants to stop "cowardly acts."

Promoted
Listen to the latest songs, only on JioSaavn.com
However, the regional constellation has changed dramatically since the last Gaza war. Hamas has emerged from its political isolation as its parent movement, the region-wide Muslim Brotherhood, rose to power in several countries in the wake of last year's Arab Spring uprisings, particularly in Egypt.

On Thursday, the Egyptian president ordered his prime minister, Hesham Kandil, to lead a senior delegation to Gaza on Friday in a show of support for Hamas. Morsi has called Israel's campaign against Hamas "unacceptable" and has recalled Egypt's ambassador to Israel in protest.

After Halting Emergency Use, Brazil Shelves Import Permit Of Covaxin