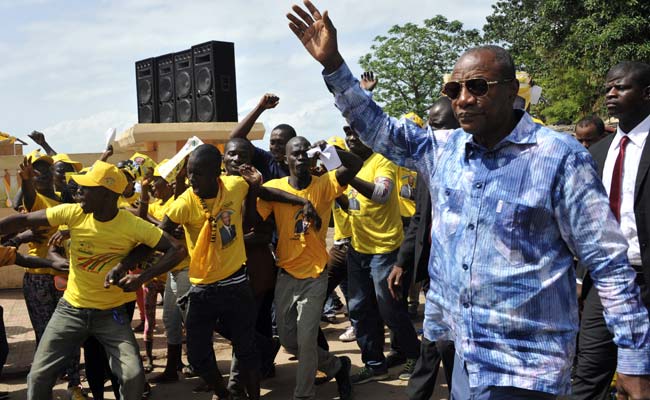 Conarky, Guinea: Alpha Conde's arrival to power in Guinea five years ago followed long years as an exiled opposition leader tilting against despotic and military regimes, which earned him a brief spell in prison.

Despite already being in his seventies, the winner of the west African country's first democratic election in 2010 was seen as offering a chance for a break with the past.

The 77-year-old president, who looks set for a second term, according to preliminary results, is a talented orator who knows how to fire up a crowd.

Allies and critics alike acknowledge his charisma and intelligence, but also describe him as authoritarian and impulsive, someone who rarely listens to others and often acts alone.

Born on March 4, 1938 in Boke in the western Lower Guinea region, Conde comes from the Malinke tribe mostly found in Upper Guinea in the east.

A slender man who walks with a slight limp, he left Guinea for France at age 15 to study, graduating with degrees in economics, law and sociology and going on to teach at the prestigious Sorbonne University in Paris.

In his autobiography he describes how he first supported the "revolutionary" Ahmed Sekou Toure, Guinea's first president after independence from France in 1958, but later opposed the concentration of power in the hands of one man.

As head of the Federation of Black African students in France, he led opposition to Sekou Toure's regime, for which he was condemned to death in absentia in 1970.

During some 30 years of exile, Conde cultivated ties with leading French politicians and personalities, returning to Guinea only in 1991, seven years after Sekou Toure's death.

Taking advantage of the semblance of reforms introduced by Sekou Toure's former army chief Lansana Conte, Conde ran in the country's first multi-party presidential election in 1993 and again in 1998.

Both polls were widely seen as rigged but Conde was officially credited with winning 27 percent and 18 percent in the respective votes.

The founder of the Rally of Guinean People (RPG) was deemed enough of a threat to Conte's hegemony to be arrested directly after the 1998 election and sentenced in 2000 for "undermining the authority of the state". Following international pressure, he was pardoned in 2001.

Leaving prison, he said his role model was Nelson Mandela, who was imprisoned by South Africa's apartheid government and went on to become the country's first black president. "It is necessary to be like him, to forgive, but never forget," Conde said.

In 2003, he joined other opposition parties in boycotting presidential elections.

He was also one of the first to hold the head of the junta responsible for the September 2009 massacre of more than 150 protesters in a Conakry stadium.

In 2010, his hour finally dawned when he was narrowly elected president in the second round of an election pitting him against former prime minister Cellou Dalein Diallo his main rival in this month's vote.

Declaring he inherited "a country, not a state", Conde lists among his achievements the completion of a $500-million hydropower plant, reforms to make mining contracts more transparent, and, above all, his overhaul of the military.

"I think the most important reform of the past five years was the reform of the army," he told AFP and other media in an interview shortly ahead of the October 11 vote.

"Every day you had tanks in the streets, you had armoured vehicles. Soldiers would get into taxis with their Kalashnikovs, they ripped people off, etc," he said. "Today, the army is confined to barracks and the people trust the army," he said.

Conde has been married three times and has one son, Mohamed Alpha Conde, who is the subject of a preliminary investigation in France over his lavish lifestyle.

In an interview with Jeune Afrique newsweekly, his father dismissed the allegations as an attempt to "manipulate public opinion" ahead of the election.