The FBI and several congressional panels are probing allegations of collusion between Trump's team and Russia, something the president flatly denies. 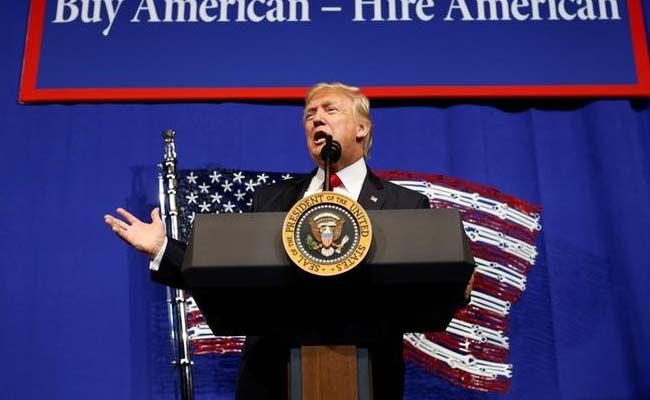 Donald Trump has been plunged into crisis mode.

Washington, United States: President Donald Trump's White House has been plunged into crisis mode -- once again -- by explosive claims that he tried to quash an FBI investigation, and divulged secrets to top Russian officials.

The twin allegations mark the latest in a string of major setbacks to have buffeted his four-month-old presidency.

Since US intelligence agencies last October accused Russia of trying to swing the presidential election in Trump's favor, questions have swirled about whether some in his campaign colluded with Moscow.

The FBI and several congressional panels are probing allegations of collusion between Trump's team and Russia, something the president flatly denies.

The cloud hanging over the White House mushroomed in February when Trump's national security adviser Michael Flynn resigned over concerns about his meetings with Russia's ambassador in Washington.

Attorney General Jeff Sessions recused himself from any Russia-related inquiries soon after, following revelations he too failed to reveal he met the envoy, Sergey Kislyak.

The day after Flynn was forced out, Trump hosted a meeting with then FBI director James Comey, at which he asked him to call off the investigation targeting Flynn, according to the New York Times.

The White House categorically denies the paper's account of events, which could amount to obstruction of justice.

Comey recounted the incident in a memo, read to the Times by an associate, which quotes Trump as saying: "He is a good guy. I hope you can let this go."

On May 9, Trump dismissed Comey as head of the FBI, dropping a bombshell in Washington where the opposition suspected him of seeking to stall the agency's Russia investigation.

The White House initially said the decision was motivated by Comey's mishandling of the probe into Hillary Clinton's emails -- but Trump himself undercut that explanation by saying he always intended to fire Comey and that his decision was linked to the Russia probe.

The day after Comey's ouster, Trump received Russia's Foreign Minister Sergey Lavrov and its ambassador to Washington, Sergey Kislyak, to whom he divulged highly classified intelligence, according to the Washington Post.

The intelligence was originally gathered by Israel, the New York Times said, and pertained to an ISIS plot to hide bombs in laptops to blow up civilian aircraft. Israel did not want the sensitive material shared with any other country, even allies.

While the White House denied access to the meeting to US media, the Russians published photos of Trump smiling and shaking hands with his Russian guests, a move that angered the White House.

The real estate mogul's administration has been plagued with allegations of conflict of interest from the beginning.

Trump's daughter Ivanka and her husband Jared Kushner, also a property developer who has become a trusted aid to his father-in-law, have maintained extensive business interests.

Before entering office, Trump revealed a plan whereby he would hand over the day-to-day running of his business empire to his two sons and a long-time business associate. But he continues to profit from his business, which critics say could leave him open to influence by outside actors.

Trump promised on the campaign trail to prevent Muslims from entering the US, but his January 27 order to ban travelers from certain Muslim-majority countries was blocked by the courts, which said the US constitution banned discrimination on religious grounds.

A watered-down version of the ban was again thwarted by the courts on March 15, with judges citing Trump's own campaign speeches as grounds for suspicion that it was a still an attempt to ban Muslims.

Promoted
Listen to the latest songs, only on JioSaavn.com
Stumbling healthcare reform

Trump failed in his first attempt to push through a sweeping overhaul of Barack Obama's signature healthcare law in March. The House eventually passed it by a whisker, but the controversial act faces a tough battle in the Senate.