Italy had insisted that Macron apologise for accusing its new government of "cynicism and irresponsibility" for refusing to take in 629 migrants. 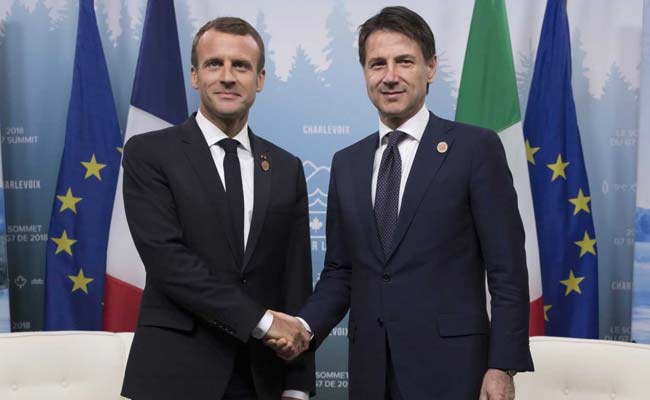 French President Emmanuel Macron did not mean to offend Italy with comments about the migrant crisis that have sparked a bitter diplomatic row, his office said Thursday.

In a phone call with Italian Prime Minister Giuseppe Conte on Wednesday evening, "the president stressed that none of his comments were intended to offend Italy and the Italian people," Macron's office said in a statement.

Italy had on Wednesday insisted that Macron apologise for accusing its populist new government of "cynicism and irresponsibility" for refusing to take in 629 migrants onboard the Aquarius rescue ship.

A lunch meeting between the two leaders in Paris on Friday, which Rome had threatened to cancel over the row, will go ahead as planned, the statement added.

Macron and Conte "confirmed the commitment of France and Italy to organising rescues within the rules on the humanitarian protection of people in danger," the statement said in reference to migrants making the dangerous Mediterranean crossing from Libya.

"The president recalled that he has always defended the need for greater European solidarity with the Italian people," Macron's office said in comments that appeared designed to lower tensions between the two sides.

"Italy and France must deepen their bilateral and European cooperation to implement an effective migration policy with countries of origin and transit," the statement said.

It called for "better common European management of borders and a European solidarity mechanism for the handling of refugees".

Promoted
Listen to the latest songs, only on JioSaavn.com
Ahead of an EU summit at the end of June, both leaders agreed that "new initiatives" were needed to handle Europe's migrant crisis, the statement said.