Maybe he is not innocent, but there is the presumption, Pope Francis told reporters during a news conference on a plane ride after his two-day trip to Morocco. 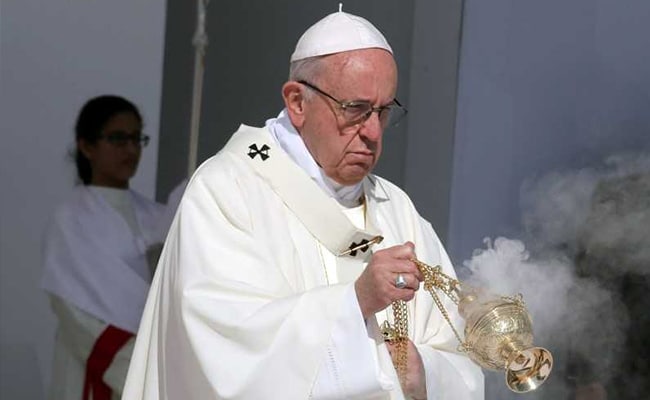 Making rare remarks about a high-profile abuse case, Pope Francis on Sunday said it was "important" that a French cardinal who had been convicted of covering up abuse be presumed innocent while he appeals his case.

"Maybe he is not innocent, but there is the presumption," Francis told reporters during a news conference on a plane ride after his two-day trip to Morocco.

Philippe Barbarin, the archbishop of Lyon and one of France's leading Catholic figures, three weeks ago was convicted of not reporting abuse to authorities. The conviction forced Francis to make a choice. Barbarin submitted his resignation after his conviction. He met soon after with the pontiff in the Vatican. But Francis, in a surprise move, did not accept the resignation. Barbarin, in turn, chose to step away from his post for an unspecified period of time.

The aftermath of Barbarin's case shows how the Catholic Church - at a time when it is trying to improve its response to the sexual abuse crisis - is facing new tests in how it responds to court decisions and how it chooses to discipline figures who are investigated or convicted in the secular justice system.

Analysts note that the church, after decades of not curbing sexual abuse by priests, is facing more pressure from external judicial authorities. In Australia, Cardinal George Pell is in prison, convicted of child sexual abuse. In Chile, church leaders have been called to testify to prosecutors about their role in the country's sprawling abuse scandal. And in the United States, attorneys general across the country are taking an aggressive look at Catholic dioceses.

Francis on Sunday did not refer to particulars of the French cardinal's case, but the pontiff said he felt he was "morally" unable to accept Barbarin's resignation.

After the appeal, Francis said, "we'll see what happens."

He cautioned against "superficial media condemnation."

"One time, I have spoken about this problem about a case in Spain of how media condemnation has ruined the life of some priests who were later found innocent," Francis said. "Before doing a media condemnation, one should think twice."

In 45-minute remarks on the plane, the pope wrapped up his 27-hour trip by warning against closing doors to migrants, building walls and fomenting fear.

Wall builders, Francis said, "shall become prisoners of the walls they build."

The remarks built on themes that Francis emphasised during his speeches in Morocco, a country that has become the top passageway for migrants from Africa trying to reach Europe.

But many Catholics say the church has diminished its credibility to speak out about moral issues because of a sluggish response to its central crisis. Amid a crescendo of abuse-related cases, Francis' approval rating has fallen. Though he has taken notable steps to address the issue - writing a letter condemning abuse to the global faithful, holding a four-day summit for leading bishops - he has tended to speak not about specifics of cases, but instead about broader themes of abuse.

The presumption of innocence is a common legal principle, and the pope has emphasized it before. During the abuse summit, Francis presented bishops with "reflection points" - ideas for contending with the crisis. One said the "presumption of innocence must also be safeguarded," and therefore, "it is necessary to prevent the lists of the accused being published, even by the dioceses, before the preliminary investigation and the definitive condemnation."

Barbarin, 68, was given a six-month suspended sentence. He was found guilty of covering up for Bernard Preynat, who is accused of abusing children in the late 1980s and early 1990s. Prosecutors had dropped the case, but victims successfully pushed to reopen it, saying Barbarin allowed the priest to stay in his post for too long and didn't report Preynat's actions to police.

The pope on Sunday took a defensive posture in explaining a February speech that concluded the sexual-abuse summit. In highly anticipated remarks, Francis described abuse in sweeping terms - as a global crisis, not just something gripping the church.

On the plane, Francis mentioned specific newspaper criticism he received about that speech but said it was correct to diagnose abuse from all angles - not just with measures to improve protection but with consideration of the spiritual reasons abuse takes place.

"You can't forget about the spiritual part," Francis said.

The pope said US bishops, with their own prescriptions for fighting the crisis, had neglected that "second spiritual dimension." The Vatican told US prelates in November to hold off on voting to implement anti-abuse measures.

"Their proposals were too much of an organization of methodologies," Francis said. "It's a concrete problem. We've got to solve it in a concrete manner. But you've got to say it's the spirit of evil."