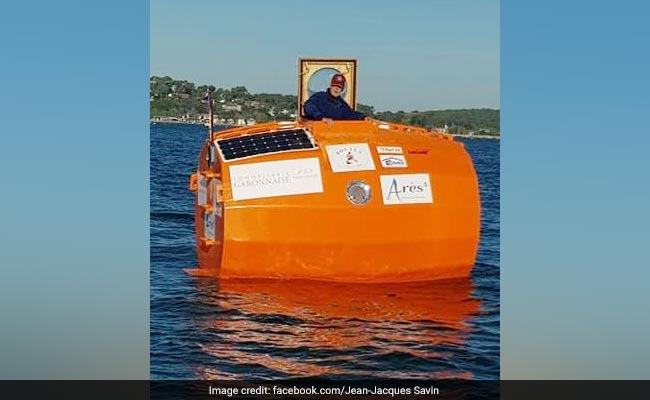 72-year-old French adventurer's handmade vessel had made a 2,930-mile journey

Last March, the National Oceanic and Atmospheric Administration's research vessel Ronald H. Brown was knocking around the waves in the middle of the Atlantic Ocean when the crew spotted a surprise on the horizon.

It was bright orange and barrel-shaped, 10 feet long and seven feet wide, its sides splashed with stickers featuring French companies and organizations. Neither engine nor sail steered the object's course. Rather, the barrel was completely at the mercy of the tossing ocean current, which very slowly was pushing it west.

As the NOAA Twitter account later related on March 27, the 274-foot vessel had encountered 72-year-old French adventurer Jean-Jacques Savin on an Atlantic crossing in a plywood barrel. He had set off from the Canary Islands on Dec. 26, 2018. By the time the NOAA ship had its chance encounter with Savin, he had already floated for more than 2,000 nautical miles.

"On behalf of the crew, Chief Boatswain Michael Lastinger lowered provisions to the French adventurer and wished him well," the NOAA Twitter account explained.

Last week, Savin's remarkable journey came to a successful conclusion after 127 days and six hours at sea. As he wrote on his Facebook page, after arriving in the Caribbean on May 2, an oil tanker towed Savin and his craft to the tiny Dutch island of St. Eustatius. His handmade vessel had made a 2,930-mile journey.

"Some joked and ask if they were arresting him on arrival for being so crazy," St. Eustatius resident Dorette Courtar told CNN. "Others, like myself, were fascinated by this journey and technology."

Madcap dashes across the Atlantic Ocean have long been a pursuit for daredevil adventurers. As The Washington Post reported in 1987, "The Guinness Book of World Records lists more than 30 methods of crossing the 3,000-mile ocean."

Memorable crossings include Norwegian explorer Thor Heyerdahl's 1970 trip across the Atlantic on a papyrus raft, and England's Timothy Severin's 1976 voyage on a craft of ox hides.

Savin's journey was inspired by Alain Bombard. In 1952, the French doctor traveled solo from the Canary Islands to Barbados in a rubber inflatable boat without any food or water, surviving on raw fish and saltwater. Before launching his attempt in the orange barrel, Savin told German broadcaster Deutsche Welle he had read Bombard's book on the journey numerous times.

Savin was no stranger to danger or to the extreme conditions an Atlantic crossing would entail. According to his website, he is a former military paratrooper and conservator at Central Africa National Park. Savin also crossed the Atlantic four times in a sailboat, ascended Mont Blanc in 2015 and swam across the Arcachon Bay in France on four occasions.

According to a Post story from Savin's launch last December, the resin-coated plywood craft he created about 65 square feet of living space inside, including a small kitchen and sleeping area. The design was built to protect both against the Atlantic's waves and attacks from orca whales. A weighted keel kept the barrel stable, and four portholes on each side of the barrel allowed Savin to look out on the water.

Solar power helped Savin to update his followers on Facebook as he made his way across the ocean. Followers could also track his progress on his website.

Savin fed himself by catching fish, CNN reported. For water, he brought along a manual water maker. He also packed a bottle of Sauternes white wine and foie gras for a New Year's Eve celebration on the high seas, as well as a bottle of Saint-Émilion red wine for his 72nd birthday in January.

Although he originally believed he could float across the ocean in around 90 days, the trip was stalled by slow wind, Savin recently told a French news site. He said the trip was relatively calm except for eight nights of rocky weather.

"Everything has an end," Savin posted on Facebook after touching down in St. Eustatius last week. "Finally, here I am at the end of this adventure."