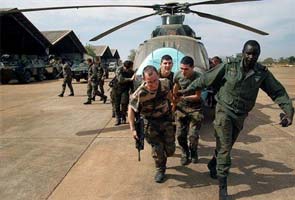 Bamako: After a punishing bombing campaign failed to stop the southward advance of Al Qaeda-linked fighters, France announced on Tuesday that it is tripling the number of troops deployed to Mali, strongly suggesting that French forces are preparing for a land assault to dislodge the extremists. The move reverses months of rhetoric in which France had said they would provide aerial and logistical support for a military intervention, but insisted it would need to be led by African troops.

Last week France plunged headfirst into the conflict, authorizing air strikes after the extremists launched an aggressive push southward. Despite pounding the north of this landlocked country with 250-kilogram (550-pound) bombs for the past five days, the rebels have extended their reach, taking over a town and its strategically important military camp in the central Malian town of Diabaly on Monday.

A French Defense Ministry official, who could not be named because he was not authorized to speak publicly on the matter, said that France was increasing the number of soldiers in Mali from 800 to 2,500.

The military chiefs of the nation's neighbouring Mali met in Bamako on Tuesday, but none of the thousands of troops pledged by these countries have yet arrived in Mali, and it has become increasingly apparent that France will be leading the attack and not playing a supporting role.

French President Francois Hollande told RFI radio early on Tuesday that he thought they would succeed in ousting the extremists in one week, but by the afternoon he outlined a far longer-term commitment: "We have one objective: To make sure when we leave, when we end this intervention, there is security in Mali, legitimate leaders, an electoral process and the terrorists no longer threaten its territory," he said during a stop in the United Arab Emirates.

Supplies for the French forces continued to arrive in a steady stream on Tuesday, part of the enormous logistics operation needed to support thousands of troops in the baking Sahara sun, a terrain the Islamists have operated in for nearly a decade. Transport planes bringing military hardware landed on the short airstrip. A giant Antonov, two C-17 Boeings and a C-160 disgorged equipment for the hundreds of French soldiers deployed in Mali, likely in preparation for a land offensive to seize back the northern territory held by a trio of rebel groups affiliated with Al Qaeda since March.

Burly men in fatigues carried wooden boxes of munitions, labeled with signs that said, "Flammable." Armored personnel carriers queued up at the airport's gasoline pump. The roughly 40 armored vehicles were driven in overnight by French soldiers, stationed in Ivory Coast. They include the ERC-90, a six-wheeled vehicle mounted with a 90 mm cannon, which points out like a horn. Dozens of French Marines who were among the first to be deployed and arrived last week, were camping inside an airport hangar, sleeping on pads laid on the cement floor. Among the supplies they are missing are mosquito nets, explained Adj. Nicolas, who gave only his first name in keeping with military protocol.

Nicolas unscrewed the top of a bottle of anti-malarial Doxycycline, and popped a white tablet. Nearby was a tube of sunscreen, which the 35-year-old had already liberally applied on his rosy face. A veteran of Afghanistan, Nicolas said the difficulty his regiment will face is the punishing Sahara heat, and the desert terrain. The average weight that each infantrymen has to carry, including a flak jacket and a camel skin filled with 2 to 3 liters of water is between 20 to 40 kilograms (45 to 90 pounds).

He said that although the Islamists appear to be mostly equipped with small arms, like the Russian-made 14.5 machine guns, he is not going to downplay them. On the first day of the intervention last week, a French helicopter gunship was downed by rebel fire. The funeral for the 41-year-old pilot was held Tuesday in Paris.

"We are not going to underestimate them," said Nicolas. "We are taking all the precautions we can."

A military spokesman for the operation in Mali, who could not be named in keeping with military protocol, said that the Islamists had managed to take more territory since the five-day air raid began, because the fighters are embedding themselves with the population, making it difficult to bomb without causing civilian casualties. The French are using the Mirage and the Rafale fighter jets, capable of carrying two and six, 250-kilogram bombs, respectively. The bombs are both laser- and GPS-guided, said the spokesman, but because of their size, they are useful for taking out convoys of rebel cars in the desert, or specific sites, like militant training camps, complexes and warehouses away from urban centers.

Over the weekend, the rebels made their way to the rice-growing region, just north of the main city in central Mali, Segou. The rebels cut across in a knifing movement, first cutting in through the road connecting Diabaly, home to an important military camp and a population of 35,000, and Niono, the last town before Segou.

France ordered the evacuation of the roughly 60 French citizens living in the area of Segou. They pounded the area around Diabaly with bombs all night from Monday, resuming again on Tuesday afternoon, said Ibrahim Toure, a man who irons laundry for a living and who spent the past two days cowering inside a mud-walled home.

"They bombed Diabaly. They bombed the town all night long. I am hiding inside a house," said Toure. "Everyone is afraid to go out."

During French President Hollande's stop in the United Arab Emirates, he said "We are confident about the speed with which we will be able to stop the aggressors, the enemy, these terrorists."

The Islamists taunted the French, saying that they have vastly exaggerated their gains, and added that his fighters had seized "tonnes and tonnes" of weapons at the Diabaly military camp. He claimed they killed many of the soldiers there. The survivors ran away on foot, a claim that was confirmed by a security official in Bamako, who could not be named because he was not authorized to speak publicly.

"I would advise France not to sing their victory song too quickly. They managed to leave Afghanistan. They will never leave Mali," said Oumar Ould Hamaha, a commander of the Movement for Oneness and Jihad in West Africa, one of the extremist groups controlling northern Mali, whose fighters are believed to be in Diabaly.

Promoted
Listen to the latest songs, only on JioSaavn.com
"It's to our advantage that they send in French troops on foot," Hamaha said. "We are waiting for them. And what they should know is that every French soldier that comes into our territory should make sure to prepare his will beforehand, because he will not leave alive."