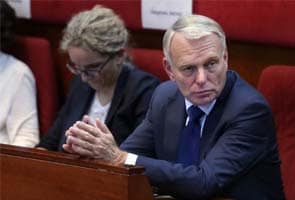 Paris: The French government has called for restraint after learning that a satirical weekly plans to publish cartoons of the Prophet Mohammad on Wednesday just as an anti-Islam video has ignited Muslim protests around the globe.

The Paris offices of the paper, Charlie Hebdo, were firebombed last November after it published a mocking caricature of Mohammad, and in 2005 Danish cartoons of the Prophet sparked a wave of protests across the Muslim world in which at least 50 people were killed.

Foreign Minister Laurent Fabius, asked about the publication, said any provocation now could only be condemned.

Prime Minister Jean-Marc Ayrault issued a statement saying: "In the current climate, the prime minister wishes to stress his disapproval of all excess and calls on everyone to behave responsibly."

France is home to Europe's largest Muslim population. Calls are already circulating on social networks and the Internet for protests on Saturday over an anti-Islam film that was made with private funds in the United States and posted on the Internet.

Last Sunday police arrested about 150 people who sought to take part in an unapproved protest near the U.S. Embassy in Paris.

In the torrent of violence blamed on the film, U.S. and other Western embassies have been attacked in cities in Asia, Africa and the Middle East.

The U.S. ambassador to Libya and three other Americans were killed last week in an attack in Benghazi, and Afghan militants killed 12 people in a suicide attack on Tuesday that they said was in retaliation for the film.

Charlie Hebdo, renowned for its irreverent treatment of the political establishment and public figures, argued that it had the right to uphold that tradition.

"We do caricatures of everyone, and above all every week, and when we do it with the Prophet, it's called provocation," the paper's editor, Stephane Charbonnier, told the news channel i>TELE.

He said that if Charlie Hebdo stopped printing satirical work because of pressure or fear of offence, it would be reduced to selling 16 blank pages every week.

Cartoons seen by Reuters that were due to be published on the inside pages of the paper included a series of images, including nude caricatures, poking fun at Mohammad.

Many Muslims object to any representation of Allah or Mohammad or to irreverent treatment of the Koran.

"The CFCM is deeply attached to freedom of speech but considers that nothing can justify insult and inciting hatred," it said in a statement.

"The CFCM calls on the Muslims of France not to give in to such provocation and urges them to express their indignation calmly and in lawful manner."

Charlie Hebdo has got into hot water on similar issues more than once.

Former editor Philippe Val was pursued in French courts on charges of racial injury, and ultimately acquitted, after the paper reprinted the Danish cartoons of Mohammad.

"Takes Your Breath Away": US Confronts Growing Costs Of Coronavirus