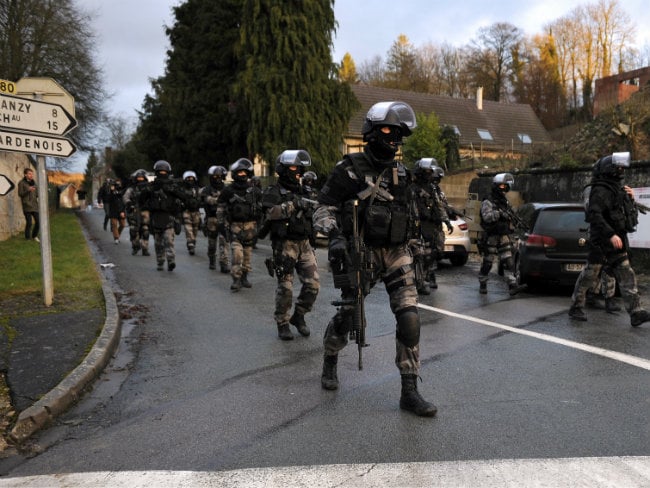 Paris, France: France deployed elite forces in the hunt for two brothers accused of killing 12 people in an Islamist attack on satirical weekly Charlie Hebdo, as the pair spent a second night on the run despite a huge security operation.

The manhunt came as the head of Britain's domestic spy agency MI5 warned that Islamist militants were planning other "mass casualty attacks against the West" and that intelligence services may be powerless to stop them.

The attacks have sparked a global outpouring of tributes and solidarity. US President Barack Obama was the latest to sign a book of condolence in Washington with the message "Vive la France!" as thousands gathered in Paris on a day of national mourning Thursday, and the Eiffel Tower dimmed its lights to honour the dead.

Friday was expected to see Muslim faithful attending prayers across France after the head of the French Muslim Council called on people to gather "in dignity and silence", and urged imams to condemn "violence and terrorism".

In the rural Aisne region northeast of Paris, armed police and paramilitary forces backed by helicopters searched a wooded area near where the fugitives are believed to have robbed a petrol station and abandoned their getaway car following Wednesday's shooting in the capital.

The brothers were thought to have carried out the attack, the worst in France for half a century, in revenge for the weekly's repeated publication of cartoons mocking the Prophet Mohammed.

Around 24 hours into the manhunt, the brothers were identified after holding up the petrol station 80 kilometres (50 miles) from Paris, before fleeing again, possibly on foot and still armed with at least a Kalashnikov, police said.

Special police units rushed to the scene, where a maximum security alert was declared in addition to the capital.

Officers in heavy black bulletproof vests searched outbuildings, rifles at the ready, under the nervous eyes of local residents.

"I live near the woods," said village resident Roseline, a grandmother. "I'm afraid. Night is falling and they could be hiding nearby."

Islamic State, the militant group sowing terror across swathes of Iraq and Syria, hailed the brothers as "heroes" on its Al-Bayan radio station.

French Interior Minister Bernard Cazeneuve announced that a total of 88,000 security forces were on alert across the country and that an international meeting on terrorism would take place in Paris on Sunday.

Arrest warrants were issued for Cherif Kouachi, 32, a known jihadist convicted in 2008 for involvement in a network sending fighters to Iraq, and his 34-year-old brother Said. Both were born in Paris to Algerian parents and were orphaned at an early age.

A senior US administration official told AFP that one of the two brothers was believed to have trained with Al-Qaeda in Yemen, while another source said that the pair had been on a US terror watch list "for years".

The brothers were both flagged in a US database as terror suspects, and also on the no-fly list, meaning they were barred from flying into the United States, the officials said.

Cazeneuve meanwhile said nine people had been detained as part of the operation.

Mourad Hamyd, an 18-year-old suspected of being an accomplice in the attack, handed himself in, police sources said. It was not clear what role, if any, he may have played in the attack.

As the dramatic chase unfolded, bells tolled across France at midday Thursday and people gathered outside the headquarters of Charlie Hebdo in pouring rain with banners reading "Je Suis Charlie" (I am Charlie).

The same sign has featured in vigils around the world, from Australia to the United States.

Several thousand people gathered later in Paris for a second night in tribute to those killed as the Eiffel Tower dimmed its lights.

Television footage showed children at a Muslim school in the northern city of Lille holding up sheets of paper emblazoned "not in my name".

Charlie Hebdo reporter Laurent Leger, who miraculously survived the bloodbath by hiding under a table, gave the first eyewitness account from inside the office.

"I saw a masked man, I saw a lot of blood, I saw half the editorial team on the ground," he told France Info radio. "I saw horror."

The gunmen were heard shouting "Allahu akbar" ("God is greatest") as they murdered some of France's most outspoken journalists, as well as two policemen.

Meanwhile, several other incidents rocked the jittery nation including the fatal shooting of a policewoman just south of Paris.

Two Muslim places of worship were fired at, prosecutors said, although no casualties were reported.

Declaring Thursday a national day of mourning -- only the fifth in the last 50 years -- President Francois Hollande called the Charlie Hebdo attack "an act of exceptional barbarity".

The government also called for large demonstrations to show solidarity across the country on Sunday. Hollande ordered flags to fly at half-mast for three days in France.

Promoted
Listen to the latest songs, only on JioSaavn.com
France's main Islamic groups urged imams to condemn terrorism and join rallies against the attacks over the weekend.