Four killed in clashes during Islamist protest in Egypt 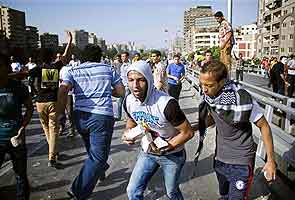 A supporter of Egypt's ousted President Mohammed Morsi holds bricks during clashes on the Al-Malek Al-Saleh bridge in Cairo.

Cairo: An Egyptian Health Ministry official says four people have been killed in clashes between Islamist supporters of the ousted president and security forces.

Khaled el-Khatib says the four were killed on Friday in Cairo, while 40 others were wounded nationwide.

Promoted
Listen to the latest songs, only on JioSaavn.com
Fighting broke out when Morsi's supporters tried to converge on Cairo's Tahrir Square.