Former US President Bill Clinton in Haiti to visit projects 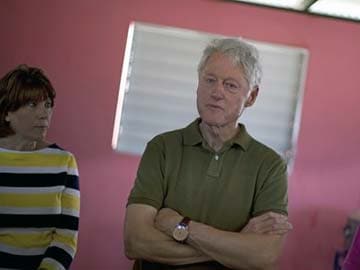 Port-Au-Prince, Haiti: Bill Clinton arrived in Haiti on Monday to shine a spotlight on some of the projects that his private foundation has supported to help the country recover from a devastating earthquake in 2010.

The former U.S. president began the visit with a tour at a solar-powered primary school in Cite Soleil, a forsaken seaside slum that is one of the Caribbean nation's poorest neighborhoods.

The Clinton Foundation helped the Institution Mixte Union des Apotres-Prodev plant trees and a garden, meant to help feed the school's 200 students. And it helped organize a donation of 64 solar panels by NRG Energy Inc. valued at $100,000.

Promoted
Listen to the latest songs, only on JioSaavn.com
"This is going to be a complete - not only educational but neighborhood experience," Clinton told reporters. "It's a good model."

During his visit, Clinton will also tour a training school for Haitian coffee farmers in a remote village as well as a recycling center and a new apparel manufacturer that invests part of its profits in its employees and their families.