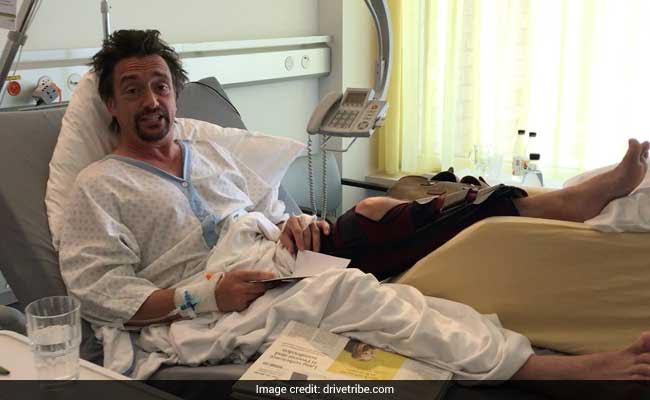 Richard Hammond posted a video from the hospital, assuring fans that he is alright.

London: British TV presenter Richard Hammond was hurt Saturday in a "serious crash" in Switzerland but escaped with "no serious injury", a spokesman for his car show said.

The former presenter of "Top Gear" -- the world's most-watched factual TV show -- suffered "a fracture to his knee", escaping from the electric car just before it burst into flames. He was airlifted to hospital in St Gallen in northeast Switzerland.

"Richard was conscious and talking, and climbed out of the car himself before the vehicle burst into flames," a spokesman for Amazon's "The Grand Tour programme" said.

Pictures posted online showed the charred wreck of the car flipped over and surrounded by flames. A video, apparently taken moments before the crash, showed it skidding onto a grass verge as it took a sharp turn.

Hammond had been completing the Hemburg Hill Climb in Switzerland in a Rimac Concept One, an electric super-car built in Croatia.

He was filming the second season of "The Grand Tour" for the Amazon Prime streaming site, the spokesman said.

His colleague Jeremy Clarkson tweeted: "It was the biggest crash I've ever seen and the most frightening but incredibly, and thankfully, Richard seems to be mostly ok."

Clarkson and Hammond used to present "Top Gear", a hugely popular and lucrative car show on the BBC from which Clarkson was sacked in 2015 for punching a producer.

Hammond suffered life-threatening head injuries while filming for "Top Gear" in 2006 when he crashed a jet-powered car at 288 miles (463 kilometres) per hour.

He was in a coma for two weeks.

In March this year he assured fans he was fine after falling off a motorbike "many times" while filming for "The Grand Tour" in Mozambique.

Promoted
Listen to the latest songs, only on JioSaavn.com
"Top Gear" is the globe's most widely watched factual TV show, according to Guinness World Records, airing in some 200 territories around the world.

(This story has not been edited by NDTV staff and is auto-generated from a syndicated feed.)
Comments
Richard Hammond crashThe Grand TourRichard Hammond