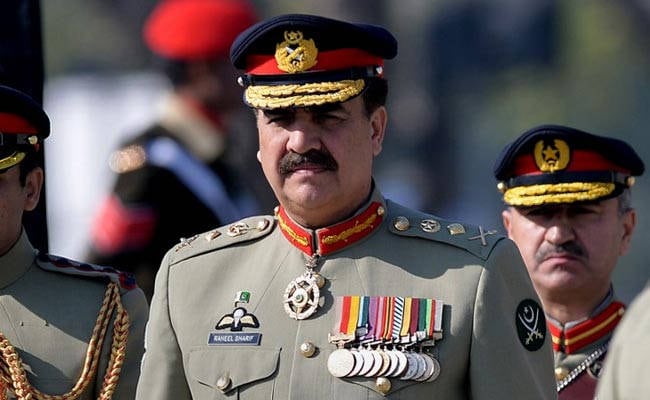 Islamabad: Pakistan's former army chief Gen Raheel Sharif left for Riyadh today to head a 41-nation Islamic military alliance after getting the government's approval, Defence Minister Khawaja Asif said amidst concerns about the Saudi-led grouping. Asif said that Gen Sharif had been "given permission to head the military alliance after completion of all legal formalities and requirements" by the Pakistan government three days ago. Media reports suggested that the 60-year-old former chief of army staff was granted approval to serve as head of the alliance, dubbed as Islamic Nato, for three years.

"We have issued the NOC after he completed all formalities including a permission by army headquarters," he said.

He said Saudi Arabia has approached Pakistan about three months ago to acquire services of General Raheel and Pakistan agreed to allow him to lead the alliance.

Sharif, who has army chief for three years till his retirement on November 29, 2016, left for Riyadh today on a special aircraft and was accompanied by his wife and mother.

The issue of General Raheel was a difficult decision due to rivalry between Saudi Arabia and Iran but Pakistan decided to let him join the alliance as its first chief due to close ties with Riyadh.

It was not immediately clear if the government had discussed its decision with opposition parties, which recently expressed serious misgivings regarding the issue in light of the possibility that the alliance may be used against Iran, the Dawn newspaper reported.

The news also seemed to go against what the defence minister himself had assured Parliament of on April 13, the report said.

Asif had said that the Saudi government would hold a grand meeting in May, where it would unveil the alliance's Terms of Reference (ToR).

He had further said that the former COAS would formally apply for a No Objection Certificate after the ToR was made public.

He also said that the ToR and the aims and objectives of the alliance would be presented to Parliament before a formal decision would be made on whether Pakistan should become a part of it or not.

The 41-nation armed coalition was initially proposed as a platform for security cooperation among Muslim countries and included provisions for training, equipment and troops, and the involvement of religious scholars for devising a counter- terrorism narrative.

Since news of the alliance first surfaced, there have been concerns in Pakistan about its nature and how it may affect a pre-existing parliamentary resolution on Yemen passed unanimously by lawmakers calling for "neutrality in the conflict" in 2015.

On April 13, Asif had told the National Assembly: "We will stick to our prerogative when it comes to Yemen, and the agreement we have will remain binding."

"Pakistan greatly values historic Pak-Iran relationship and the same shall continue based on mutual trust and respect for each other's interests," Gen Bajwa had told Honardoost.

Extraordinary importance was attached to the meeting by diplomatic circles because it was the second between the two in around six weeks, a rare happening in Pakistan-Iran relations given the mutual mistrust, the Dawn said.

Earlier this month, Honardoost had said that Iran had reservations on the appointment of Gen Sharif as the head of the Saudi-led Islamic military alliance, warning that it may "impact" the unity among Muslim countries.

Promoted
Listen to the latest songs, only on JioSaavn.com
"We are concerned about this issue... that it may impact the unity of Islamic countries," Honardoost said, adding that Tehran had conveyed its concerns to Islamabad.