Hayden Hatfield, getting married had a little flower girl. This girl was one who Hayden had donated bone marrow to help the toddler fight childhood leukemia. 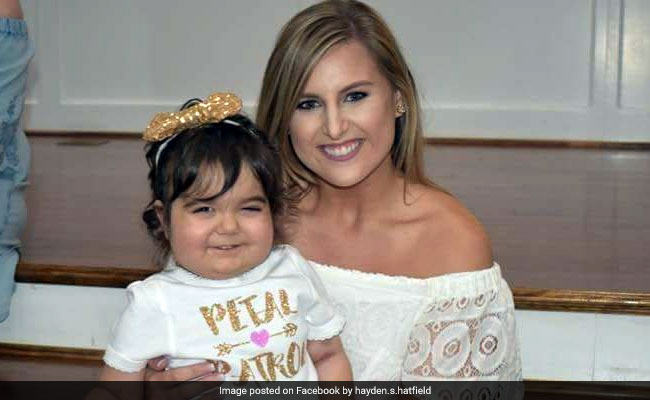 As soon as Hayden Hatfield started walking down the aisle, her eyes locked on her flower girl.

The bride thought about their special connection - years earlier, she had donated her bone marrow to help the toddler fight a rare form of childhood leukemia. They had stayed in touch through letters and phone calls and toys and trinkets sent through the mail. They had become like family. Now that Hatfield was getting married, she said, it meant everything to her to have the 3-year-old by her side during her wedding June 9.

"I didn't want to take my eyes off her," she said about the moment she saw Skye Savren-McCormick waiting at the altar at Shiloh Baptist Church in Hartford, Ala.

"Knowing she was not only there but that she was part of this life event for me, I was the most humbled person. They just don't understand how important they are to me," she said about Skye and her parents.

Hatfield, now Hayden Ryals, 26, had registered as a bone marrow donor in 2015 - at a time, she said, when she had been struggling, changing her major at Auburn University and still trying to decide what she wanted to do with her life and who she wanted to be. It was almost exactly a year later when she received a phone call - she was a match to an anonymous 1-year-old child many miles away.

"I had started to question whether I had a purpose here," she said. "That phone call gave me a purpose."

After Skye was born in 2015, she developed petechiae, or pinpoint bruises, said her father, Todd Savren-McCormick. The bruising eventually disappeared but then returned, and the child kept getting sick. Four days before her first birthday, after months of doctors appointments and tests and unanswered questions, Skye was diagnosed with juvenile myelomonocytic leukemia, a rare and aggressive form of blood cancer, according to the Leukemia and Lymphoma Society.

She needed a bone-marrow transplant.

So on July 28, 2016, doctors in Alabama extracted some of Ryals' bone marrow and, the next day, doctors in California transplanted it into Skye's bloodstream.

It would be a long road to recovery. Skye's father, from Ventura, California, said his daughter developed a bacterial infection and her spleen was removed because of complications from the cancer. She then needed a second transplant - which was possible because Ryals had donated enough bone marrow for two procedures, he said.

Then, while Skye was recovering from the second bone marrow transplant, Savren-McCormick said, one of her eyes started to swell and doctors diagnosed her with a second form of cancer - post-transplant lymphoproliferative disease. It had attacked her eyelid, both sides of her neck, her chest and her spinal column, her father said.

She needed chemotherapy, which wiped out the bone marrow - meaning she needed another transplant.

Savren-McCormick said that because there are regulations on donations, they returned to the Be the Match registry and found another donor - this time, using peripheral blood stem cells instead of the bone marrow. But, the father said, "If Hayden hadn't donated her bone marrow, our daughter would not have made it her other donation. She got us to a place where we could survive this."

But Ryals said she didn't save the toddler.

Over the past year, the two families stayed in contact with each other but had still never met face-to-face. In March, Ryals sent Skye a very special present for her 3rd birthday - an Elsa doll from the movie "Frozen," a Poppy blanket from "Trolls" and an invitation to her wedding.

"I said I wanted them to know how much I love them and how much they're wanted," Ryals said. She said that though she knew it was a long shot, she mentioned how nice it would be for Skye to be her flower girl.

Skye's father said the toddler was on oxygen at the time and battling Graft-Versus-Host Disease, a complication from stem cell transplants. But, he said, as the wedding date approached, Skye got better, so they took her to Hartford, Alabama.

Ryals and Skye met for the first time in the church a day before the wedding. Ryals said that when she walked in, she was overwhelmed with emotion. She walked over to Skye, she said, and fell to her knees.

Ryals said Skye's mother asked the toddler who Ryals was and she responded, "Hay-Hay," her nickname for Ryals. Then she hugged Ryals.

"It was like a fairy tale," Ryals said. She said she thought, "'I can't believe I'm finally meeting this little girl.' . . . It was unreal. It was magical."

On June 9, Skye entered the chapel, paving the way with flower petals just as she had been practicing - step, step, drop - her father said.

Ryals said there was not a dry eye in the church.

"It was amazing to me how many heart strings she tugged on all at once," she said.

Then Ryals walked down the aisle to marry her groom, Adrian, carrying a bouquet draped with something from Skye and her parents - a gold locket with Skye's picture tucked into one side and a message engraved on the other: "This heart beats with yours."

During the ceremony, Skye sat quietly on the steps at the altar, playing with the leaves on a nearby fern and pulling on the bow on her dress.

Ryals said that she feels like she has known Skye and her parents her entire life.

"It's sort of like we got a new family in Alabama and it's been joyous," he said.

(Except for the headline, this story has not been edited by NDTV staff and is published from a syndicated feed.)
Promoted
Listen to the latest songs, only on JioSaavn.com
Comments
flower girlbone marrow donorleukemia