A 2005 census found that of all residents, including non-citizens, 76 percent are Muslim and 9 percent are Christian, while 15 percent are from other religions - mainly Hindus and Buddhists but also Sikhs and Jews. 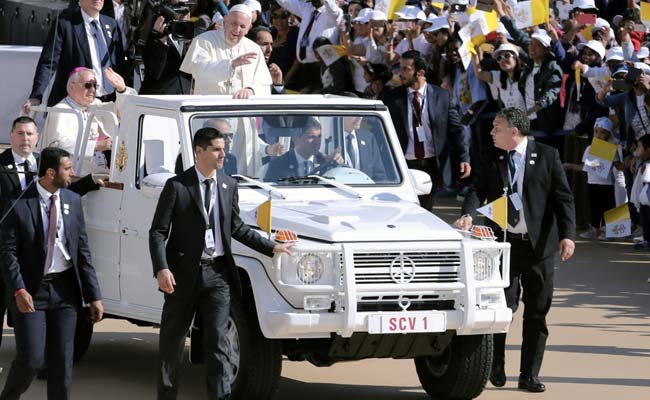 In the first visit by a sitting pope to the Arabian Peninsula, Pope Francis delivered on Tuesday a Mass for an estimated 180,000 people in Abu Dhabi, capital of the United Arab Emirates. Hymns proclaiming "Hallelujah" boomed from speakers as the crowd at Zayed Sports City Stadium cheered Francis's arrival in easily the first such display of Christian worship of its kind in the Arabian Peninsula in modern times.

In a sermon delivered in Italian with English and Arabic subtitles, the pope spoke about the difficulty of working far from home to his multinational audience. Prayers were later delivered in a host of languages in recognition of the diverse crowd, including French, Tagalog of the Philippines and the Indian language of Konkani. Here are five things to know about religious practice and freedom in the UAE:

Vast majority of the nation's residents are non-citizens, and they practice various religions

People from all over the world have flocked to the Emirates, drawn by business and labor opportunities in the expansive cities of Dubai and Abu Dhabi. As a result, of the approximately 9.1 million people who live in the UAE, only 11 percent are citizens. There is no mechanism for naturalization, meaning all citizens are native born. A 2005 census found that of all residents, including non-citizens, 76 percent are Muslim and 9 percent are Christian, while 15 percent are from other religions - mainly Hindus and Buddhists but also Sikhs and Jews.

Islam is the official religion of the UAE

The constitution enshrines Islam as the official religion of the state, and there are laws against blasphemy, proselytizing by non-Muslims and converting from Islam. But the constitution also guarantees freedom of worship as long as it does not contradict public policy or morals - a vague designation that critics say gives the government wide berth to interpret what acceptable forms of worship are. According to a 2017 US State Department report on religious freedom in the UAE, "Individuals belonging to non-Islamic faiths said they could worship in private without government interference but faced restrictions on practicing their religion in public."

There are Christian churches, Hindu temples, Sikh temples and spaces for Jewish worship

Because there is no path to citizenship in the UAE, religious minorities are not allowed to own land. That makes building houses of worship difficult but not impossible. Several religious groups have been granted land by government officials, but the expansion of non-Muslim houses of worship is tightly controlled. Laws exist that forbid the building of bell towers and displaying symbols such as crosses on roofs, but the State Department report indicated such laws are not strictly enforced. Public celebrations of major Christian and Hindu holidays and Chinese New Year are tolerated, as are advertising and publicizing non-Muslim religious services. Still, religious minorities say there isn't enough space to accommodate the large congregations. According to the Wall Street Journal, there are more than 700 Christian congregations but only 45 officially sanctioned church buildings nationwide.

There is an official Ministry of Tolerance

On the heels of the rise of groups such as the Islamic State, the UAE and other Arab countries sought to define "moderate Islam" in an effort to project an image of tolerance to the West and discourage extremism at home. But the Emirates went a step further, establishing a Ministry of Tolerance to promote what it considered the true image of Islam, one that tolerates coexistence. In practice, scholars say the UAE has co-opted the term "moderate Islam" to pursue its political goals in the region and brand critics as religious extremists. "When a regime like the UAE claims to represent moderate Islam and paints any alternative expression of Islam as extremist, the United States is more likely to ignore human rights violations against 'terrorists' and continue offering military and financial partnership," Annelle Sheline, a political scientist at Rice University, wrote in 2017.

The UAE considers Islamist movements as the primary threat to its hereditary system of government and national security, especially in the wake of the Arab Spring uprisings in 2011, which swept Islamist political groups into power in places such as Tunisia and Egypt. The UAE has used blasphemy and anti-terrorism laws to ensnare critics while outlawing the Muslim Brotherhood, the largest and most organized political Islamic movement in the Middle East.

But state control of Islam extends much deeper into the daily lives of Muslims in the UAE. The government picks and vets all imams and provides weekly guidance for Friday prayer sermons. Even informal pursuits of Islamic learning must be approved by the government. According to the Associated Press, "A permit is required to hold a [Koran] memorisation circle or lecture, collect donations or distribute books or audio in mosques. The law also prohibits mosque employees from preaching and teaching religious lessons outside of mosques."