Fire on Royal Caribbean cruise ship on way to Bahamas, no casualties 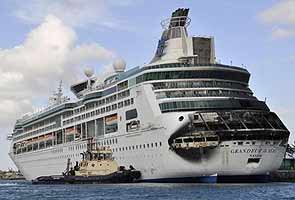 Baltimore: Fire aboard a Royal Caribbean cruise ship forced it to dock at Freeport in Bahamas on Monday with all passengers and crew safe but the rest of the trip canceled, the cruise company reported.

Grandeur of the Seas, operated by Royal Caribbean Cruises Limited, was on a seven-night trip that left Baltimore on Friday. The 916-foot-long (280-metre) ship was en route to CocoCay, Bahamas, when a fire occurred in its mooring area early on Monday, the company said in a statement.

The fire was extinguished in about two hours and the 17-year-old vessel was redirected to Freeport, the company said. As a result of the damage, the rest of the trip was canceled and passengers were refunded their fares and offered a free cruise in the future.

"Royal Caribbean International is deeply sorry for this unexpected development in our guests' vacation," the company said.

The incident was the latest in a string of bad news for the cruise industry. In March, 108 people fell sick with a gastrointestinal illness on a Royal Caribbean Cruises ship.

In February, thousands of passengers spent nearly five days on a disabled cruise ship operated by Carnival Corp in the Gulf of Mexico, after an engine-room fire knocked out power and plumbing throughout most of the ship.

Promoted
Listen to the latest songs, only on JioSaavn.com
In the most recent mishap, all 2,224 guests and 796 crew on the Royal Caribbean trip were accounted for on Monday, and only minor medical incidents were reported, including fainting and an ankle sprain, the company said.