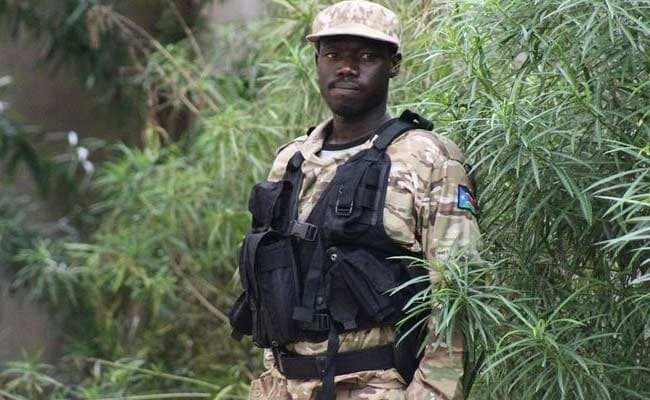 A South Sudanese policeman stands outside a compound in Juba. (Reuters Photo)

The capital has been mired in fighting almost every day since Thursday when troops loyal to Kiir and soldiers backing former rebel leader Machar first clashed, raising fears of a slide back to a full-blown conflict after a two-year civil war.

It was not immediately clear who was leading the fighting or if either side was gaining the upper hand. The violence has raised concerns that Kiir and Machar, longtime political and military rivals, may not have full control of their forces.

There has been no official death toll but at least five soldiers died on Thursday and a Health Ministry source said 272 people, including 33 civilians, were killed on Friday. After a brief lull on Saturday, Sunday's fighting appeared even fiercer.

"We urge an end to these hostilities and hope they (political leaders) will return back to taking up all the action points of the peace agreement," Shantal Persaud, spokeswoman for the UN mission UNMISS, told Reuters by telephone.

She said gunfire had erupted on Monday around the UN headquarters in the Jebel area of Juba and also around a base near the airport. UN bases were hit by small arms and heavy weapons on Sunday. One UN Chinese peacekeeper was killed.

The UN Security Council, after an emergency meeting, told the two leaders to "do their utmost to control their respective forces, urgently end the fighting and prevent the spread of violence" and commit themselves to their peace deal.

Attacks on civilians, UN personnel and UN premises might amount to war crimes that would need investigation, it said.

On Friday, Kiir and Machar had been in patch-up talks after Thursday's shootings when gunfire erupted. Both said then they could not explain what happened.

The two men have long been rivals for power both in politics and on the battlefield. The civil war erupted in December 2013 a few months after Kiir sacked Machar as his deputy.

They signed a peace deal in August 2015, but then spent months wrangling over details. Machar finally returned to Juba in April, at the time seen as step towards cementing peace.

But experts say the failure to implement swiftly key elements, such as the re-integration and demobilisation of combatants, has allowed tension to fester and risked igniting a new conflict.
© Thomson Reuters 2016