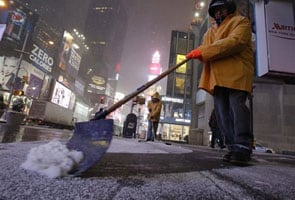 New York: A ferocious winter storm that tore across the southeastern seaboard slammed into New York City overnight, forcing the cancellation of thousands of flights and threatening train, bus and rail service for millions of commuters across the region Wednesday.

The giant amoeba-shaped snowstorm officially touched down in Central Park between 8:30 and 9 pm on Tuesday, the National Weather Service said. But hours earlier, Mayor Michael R. Bloomberg had already declared a weather emergency, something he did not do during the Dec. 26 and 27 blizzard that paralyzed the city with 20 inches of snow.

By the time the storm started pummeling the region, hundreds of flights throughout the three major New York airports had been canceled, and nearly every domestic flight through Wednesday afternoon -- thousands -- had been scrubbed. Service on some subway lines, like the B train, was suspended earlier than usual Tuesday night, and Long Island Railroad officials said they had canceled some trains Wednesday morning and would replace them with buses.

With the arrival of snow in New York and the unusually severe storm in the South -- which dumped more than a foot of snow in some areas -- the National Weather Service said an unusual nationwide occurrence had taken place. There was now snow on the ground in every single one of the 50 states -- including Hawaii, which had snowfall on one of its volcanoes -- except for Florida. New York City was also well on its way to surpassing the 22.4 inches of snowfall in a normal season, with 21.8 inches as of Tuesday, said Christopher Vaccaro, a weather service spokesman.

Unlike his reaction to the previous blizzard, Mayor Bloomberg took major steps to show that the city was prepared for the worst. But his declaration of a weather emergency is not the same as a snow emergency, which would have required residents to remove their cars from about 300 designated routes. Instead, the city said New Yorkers could leave their cars on the streets, but by the curb, not in the traffic lanes. The declaration said that any vehicles "found to be blocking roadways or impeding the ability to plow streets" would be towed at the owners' expense.

The declaration was issued even though the snowstorm, the powerful product of a combination of the weather systems that had already disrupted daily routines in the South and the Midwest, had not yet reached the city.

AccuWeather said it expected 6 to 12 inches here. The Metropolitan Transportation Authority was preparing for as much as 14 inches.

Hours before the declaration, Mr. Bloomberg promised a better-coordinated response than the laggardly one that followed the blizzard. The mayor said the city had made significant changes to emergency procedures since then.

"We recognize that we did not do the job that New Yorkers rightly expect of us in the last storm," Mr. Bloomberg said at a news conference at City Hall. "We intend to make sure that does not happen again."

The mayor said the decision about whether to close the city's public schools on Wednesday would not be made until 5 am.

The city lined up the same street-clearing force that was left standing by on Friday, when less than two inches of snow fell in Central Park. Officials said 365 salt spreaders and 1,700 plows were ready to go. Some were to wait out the storm not at their depots but in the neighborhoods they were to clear.

There were signs that the Sanitation Department started fending off the snow before it arrived, at least where plows were slow to show last month. Councilwoman Karen Koslowitz, a Democrat from Queens, said that by 2 pm Tuesday, the city had salted many streets in her district, which includes Forest Hills, Rego Park and Kew Gardens.

The city also announced plans to send workers to shovel snow at intersections as soon as streets were plowed, and it began using social networking sites to advertise for more help. The New York City Housing Authority sent a message on Twitter that said: "Turn a snow day into a payday. The city is looking for snow removal help. Apply now." It contained a link to a page that said the city would pay $12 an hour, which would increase to $18 an hour after 40 hours.

The city's subway, bus and rail networks pledged to run regular service on Wednesday morning, but all prepared for service changes. Officials made plans to halt express service on some subway lines on Tuesday night to move trains into tunnels and out of the snow for the night.

Mr. Bloomberg faced criticism for not declaring an emergency as the blizzard bore down last month. His top aides have since apologized, saying a snow emergency declaration probably would have improved the response. On Tuesday, officials said the mayor had declared a weather emergency because it would give them more flexibility than a snow emergency.

Last-minute shoppers jammed the aisles at some markets. Sandy Miller, who ventured into Citarella, a market on Third Avenue near 75th Street in Manhattan, said, "People were buying as if this storm is going to prevent them from eating for the next four days."