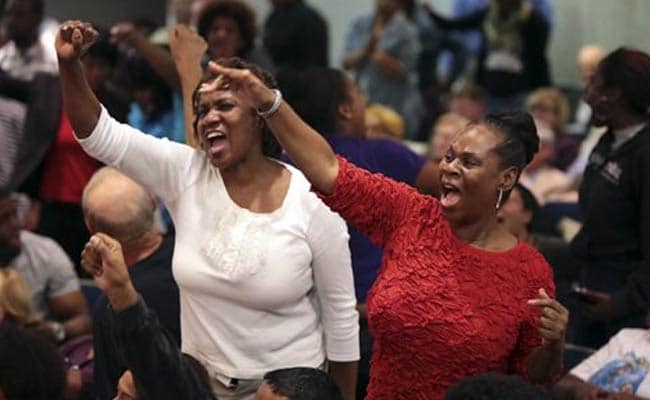 Protesters chant at a meeting of the St. Louis County Council on September 16. (Associated Press)

Clayton, Missouri: Protesters seeking the immediate arrest of the Ferguson police officer who fatally shot an unarmed 18-year-old loudly disrupted another government meeting on Tuesday, renewing calls to remove the county prosecutor investigating the case and vowing political retaliation against an elected official tied to the prosecutor.

"For all," crowd members shouted, emphasizing the second word, as the pledge concluded with, "and justice for all."

A larger protest also took place a week ago, at the Ferguson City Council's first meeting since Michael Brown's death. That was followed by unsuccessful efforts to block an interstate highway during rush hour in a demonstration that led to 35 arrests, and a weekend demonstration in downtown Ferguson linked to calls for a boycott of local businesses.

Protest leaders said they plan to broaden their efforts with demonstrations at upcoming baseball games hosted by the St. Louis Cardinals, who sit in first place and await a likely playoff berth, and the St. Louis Rams football team, who host the Dallas Cowboys on Sunday.

"It's no more business as usual," said activist Anthony Shahid, who addressed the seven council members with a noose symbolically tied around his neck.

Brown, who was black, was fatally shot Aug. 9 after a confrontation that began when Wilson asked Brown and a friend to walk on the sidewalk instead of the street. Police have said that Brown and Wilson became involved in a confrontation inside Wilson's squad car. The confrontation then spilled onto the street, where Brown was shot multiple times. Rioting broke out the next day which police responded to at first with tear gas, military-style vehicles and police dogs

Brown's shooting by the white police officer stoked a national discourse about police tactics and race. Ferguson is 67 percent black; the mayor, city council, school board and police force are almost all white.

Critics want county prosecutor Bob McCulloch to either step aside or for Gov. Jay Nixon to appoint a special prosecutor, citing concerns about whether McCulloch could fairly oversee the case. McCulloch's father was a police officer killed in the line of duty when McCulloch was a child, and he has many relatives who work in law enforcement.

McCulloch, who has been the county's elected prosecutor for more than two decades, could have filed charges himself but chose to take the case to a grand jury to decide whether the use of lethal force was justified.

Many of the nearly 40 speakers at the council meeting directed their scorn at Councilman Steve Stenger, who relied on McCulloch's endorsement and appearance in TV campaign ads to defeat County Executive Charlie Dooley in a Democratic primary days before Brown's death. Stenger faces a Republican state lawmaker in the November general election.

"Don't vote for Stenger," the crowd chanted. Other speakers gave Stenger an ultimatum to "denounce" McCulloch no later than noon on Wednesday. The shouts, jeers and chants drowned out his attempts to speak at the meeting's outset.

Hazel Erby, the council's lone black member, was the only other elected official to speak Tuesday night. Erby drew cheers when she told the demonstrators, "I have to say I agree with you."

Promoted
Listen to the latest songs, only on JioSaavn.com
After the meeting, protesters had 4 and-a-half minutes of silence in the hallway to signify the 4 and-a-half hours that Brown's body lay in the street. They then briefly marched through downtown Clayton.

The grand jury was initially set to conclude its work on Sept. 10, but a judge has extended its term until January, if necessary. McCulloch has previously said he expects the panel to complete its inquiry into Brown's shooting by next month.