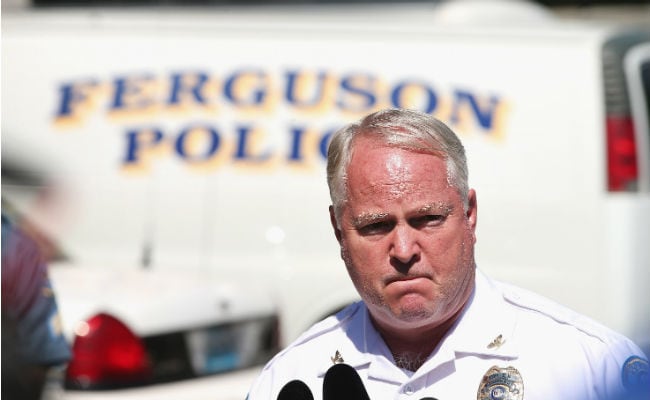 The embattled police chief in Ferguson, Missouri resigned Wednesday, a week after a scathing US Justice Department report into the fatal shooting of unarmed black teenager Michael Brown by one of his officers.

Thomas Jackson is the latest prominent official in the St. Louis suburb to stand down, seven months after Brown was shot and killed by white police officer Darren Wilson, igniting angry protests and a national debate about race and law enforcement.

"It is with profound sadness that I am announcing I am stepping down from my position of chief of police," wrote Jackson in his letter of resignation, cited by the St Louis Post-Dispatch newspaper.
"It has been an honor and a privilege to serve this great city and to serve with all of you," added Jackson, who has been police chief since 2010.

His resignation -- which was welcomed by Brown's family -- will take effect on March 19, he said, to allow "an orderly transition of command."

In a brief statement, the City of Ferguson confirmed it had agreed "a mutual separation" with Jackson that would see him get severance pay and health insurance for a year.

The Justice Department last Wednesday said it lacked sufficient evidence to prosecute Wilson on federal civil rights charges over the August 9 death of 18-year-old Brown after an altercation on a quiet residential street.

But it faulted Ferguson's city hall, police department and municipal court for racial bias in targeting its African-American majority as a means to generate revenue.

Brown's family has indicated it intends to file a civil lawsuit against Ferguson and Wilson, accusing them of unlawful death.

"Michael Brown's mother and father are relieved that actions are being taken to address the very disturbing findings in the Department of Justice report," family lawyer Benjamin Crump told CNN.

Jackson is the fifth Ferguson official to resign in the wake of the Justice Department's damning findings.

Others include Ferguson's municipal court judge, two long-time police commanders -- including Wilson's supervisor -- and, on Tuesday, its city manager.

Ferguson's court clerk was meanwhile fired over emails that smacked
of racism.

Still in office is Ferguson Mayor James Knowles. He has promised root-and-branch reforms in the community of 21,000, in which two in three residents is African American.

Promoted
Listen to the latest songs, only on JioSaavn.com
Wilson, no longer with the overwhelmingly white Ferguson police force, said he shot Brown after the youth -- a suspect in a corner-store shoplifting -- tried to grab hold of his firearm.
Others insist that Brown had put his hands up in a gesture of surrender when Wilson opened fire.

A grand jury in November chose not to indict Wilson on murder or manslaughter charges, reigniting protests that sometimes turned violent.