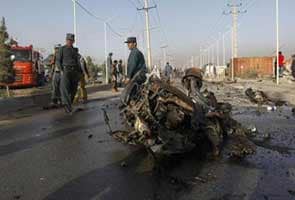 Kabul: A suicide attack on a minibus in the Afghan capital killed 12 people on Tuesday, including seven foreigners, and the Hezb-e-Islami insurgent group claimed responsibility, saying the blast was retaliation for a film mocking the Prophet Mohammad.

"A woman wearing a suicide vest blew herself up in response to the anti-Islam video," said Zubair Sediqqi, a spokesman for the militant faction, which does not usually carry out such attacks.

The attack near Kabul airport underscored growing anger in Afghanistan over the film, which has enraged much of the Muslim world and led to the killing last week of the US ambassador to Libya and three other Americans.

Thousands of protesters clashed with police in the Afghan capital on Monday, burning cars and hurling rocks at security forces in the worst outbreak of violence since February rioting over the inadvertent burning of Qurans by US soldiers.

The suicide attack was the first in Kabul involving a woman and the foreigners killed were mostly Russian and South African pilots working for an international courier company, senior police sources said.

The toll was the highest on foreigners in the city since last April when an Afghan air force pilot gunned down eight US military flight instructors and an American civilian adviser after an argument at Kabul International Airport.

Hezb-e-Islami, which means Islamic Party, is a radical militant group which shares some of the Taliban's anti-foreigner, anti-government aims.

But the political wing of the group, founded by warlord and anti-Soviet fighter Gulbuddin Hekmatyar, has recently been in nascent talks with Afghan President Hamid Karzai on a peace deal to end the 11-year war.

The attack on the van took place as it stopped to refuel near the airport. Body parts were scattered over an area at the western end of the heavily fortified airport, outside a wedding hall.

Police said several civilians were caught up in the blast, which again underscored the ability of militants to bypass police checkpoints in the city, which had been manned by extra security forces after Monday's rioting.

Promoted
Listen to the latest songs, only on JioSaavn.com
"The target was a minivan carrying employees of a foreign company who had a contract with Americans. The seven foreigners killed were Russians and South Africans," said General Mohammmad Dawod Amin, a deputy for Kabul's police chief.