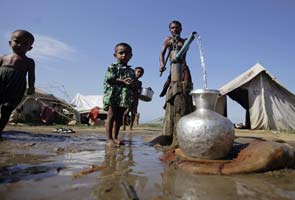 Sittwe, Myanmar: As security forces police the edgy aftermath of sectarian bloodshed in western Myanmar, fearful Buddhists and Muslims are arming themselves with homemade weapons, testing the government's resolve to prevent a new wave of violence.

Despite government claims that peace has been restored, one Buddhist was shot dead and another wounded on Tuesday when security forces opened fire in Kyauknimaw on Ramree Island, according to official sources in the Rakhine State capital of Sittwe.

Hand grenades were thrown on Sunday night at two mosques in Karen State in the east of the country, domestic media reported, causing no casualties but raising fears of rising anti-Muslim sentiment elsewhere in Myanmar.

The violence between Buddhist Rakhines and Muslim Rohingyas has killed 84 people and wounded 129 since October 21, according to an official toll, in Myanmar's biggest test since a reformist government replaced a military junta 18 months ago.

"The government has reinforced security forces, both police and military, to all conflict areas," said Win Myaing, the Rakhine State spokesman. "If both parties follow the law, there won't be any conflict."

Surin Pitsuwan, secretary general of the 10-member Association of Southeast Asian Nations, of which Myanmar is a member, warned continuing violence could destabilise the region.

"This has larger and wider implications and we are all potentially affected," he said in an interview with Reuters in Kuala Lumpur. "I am calling the world to pay attention to this and to come around and try and resolve the problem."

Opposition leader Aung San Suu Kyi has disappointed supporters by failing to make a clear moral statement on the ongoing abuses. Her National League for Democracy (NLD) party has remained silent on the issue since releasing a brief statement on October 24. NLD leaders could not be reached for comment.

"We're here to protect you"

The United Nations says more than 97 per cent of the 28,108 people displaced are Muslims, mostly stateless Rohingya. Many now live in camps, adding to 75,000 mostly Rohingya displaced in June after a previous explosion of sectarian violence killed at least 80 people.

"Calm down! We're here to protect you," shouted an army major at Purein village in northern Rakhine State, where soldiers pleaded with Rohingyas to lay down their swords and machetes.

The Rohingyas said their homes were burned down a week ago by Rakhines armed with slingshots, wooden staves, knives and gasoline.

"Suddenly, we came under attack. Why? I was born here, my father was born here. This is our home," said Badu, the 50-year-old head of a Rohingya family of nine. "We got along before but there's nothing left. Where did all the anger come from?"

Rohingya women now sift the ashes for blackened nails for their men to build the bamboo frames of new homes.

Both Rohingyas and Rakhines in Purein village say the attack was initiated by Buddhists outsiders who torched homes one morning and killed three people, including an elderly woman who was unable to flee. An overstretched military was unable to prevent retribution by Rohingyas.

"The Rohingyas came back to attack us and tried to burn down our village, but everyone had fled," said the Rakhine village leader, Kyaw Maw.
"No Rakhines from this village were involved. I don't know who it was that first attacked them."

Kyaw Maw said the Rohingya community there had recently doubled, absorbing new settlers since the June violence, and took a larger share of the rice grown on land no one owned. The days of cordial ties, he said, were over.

"Everyone is scared of them now. We didn't attack them, but they think we are enemies. I want these Kalars to stay well away from us," he said, referring to Rohingyas by a term considered offensive in Myanmar.

Myanmar's Buddhist-majority government regards the estimated 800,000 Rohingyas in the country as illegal immigrants from Bangladesh and its laws deny them citizenship. Bangladesh has refused to grant Rohingyas refugee status since 1992. The United Nations calls them "virtually friendless in Myanmar".

"Most Rakhines follow the law," said state spokesman Win Myaing. "The Muslims don't. They want to bully the Rakhine in areas where they have more people."

The violence started in northern Rakhine State and spread south to the town of Kyaukpyu, an area crucial to China's energy investments in Myanmar, where satellite images show an entire Muslim quarter was razed by fires.

The shooting by security forces at Kyauknimaw on Tuesday took place near the spot where a Buddhist woman was raped and murdered, allegedly by Muslims, in May, which helped spark the sectarian violence that engulfed the state the following month.

"As you know, when security forces have to control the situation, there can be gunfire," said spokesman Win Myaing.

Promoted
Listen to the latest songs, only on JioSaavn.com
If keeping angry Buddhists and Muslims apart is proving hard, then reconciling them seems impossible. Purein is now a village divided. People who a week ago cultivated the same paddy fields now no longer cross a stream that separated the two communities. Few believe authorities will protect them.

"I don't know why this is happening," said a Rohingya man who called himself Pathon.
© Thomson Reuters 2012
Comments
Myanmar violence