Columbine and dozens of other Denver-area schools were placed under a "lockout" security alert as authorities cited a potential credible threat posed by an 18-year-old woman described as armed and "extremely dangerous." 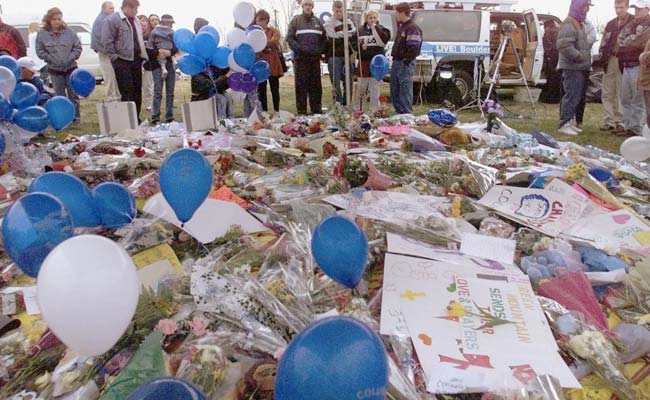 A woman described as "infatuated" with the 1999 Columbine High School massacre, who bought a pump-action shotgun and ammunition after she flew into Colorado on Monday, is an extreme threat, the FBI and police said on Tuesday.

Columbine and dozens of other Denver-area schools were issued a security threat Tuesday afternoon and a decision will be made early Wednesday as to whether schools will be in session or other security measures taken, officials said in a late night press conference.

"We consider her a credible threat to the community," said Federal Bureau of Investigation Special Agent in Charge of the Denver office, Dean Phillips, at a news briefing.

Earlier Tuesday, the Jefferson County Sheriff's Office issued a warning, calling the woman they identified as Sol Pais, 18 of Florida, as "extremely dangerous."

Phillips said the local FBI were notified by the FBI's Miami office that Pais made verbal threats and had traveled to Colorado.

She has not made any specific threats to any particular school, but her reported verbal comments to others made her a credible threat, Phillips said. He did not offer specifics about the comments at the press conference.

FBI agents, along with Jefferson County Sheriff's deputies and Colorado state troopers, have searched for her, including hunting through rural Jefferson County foothills throughout the day and have published her name and photo in local media.

Pais has not been charged with any crime, but Phillips said, "Our priority is to find Miss Pais."

The alert came four days before the 20th anniversary of the Columbine tragedy, in which two heavily armed teen boys stormed their high school in Littleton, a Denver suburb, and fatally shot 12 classmates and a teacher before committing suicide. At the time it was the deadliest school shooting in US history.

On Tuesday, the Jefferson County Sheriff's Office placed Columbine and 21 surrounding schools under a security "lockout," allowing activities inside to continue as usual but restricting entry and exit at the schools.

The Colorado Department of Public Safety later alerted schools throughout the Denver metropolitan area to the threat, recommending they conduct a "controlled release" of students from classes in the afternoon.

Earlier, an FBI bulletin said authorities lacked probable cause for a formal arrest but that law enforcement should detain Pais for a "mental health" evaluation.

The sheriff's Twitter post, which included two photos of Pais, said she was dressed in a black T-shirt, camouflage pants and black boots.

The Denver Post reported that one of its correspondents called the home of Pais' parents in Surfside, Florida, located near Miami, and that a man identifying himself as an FBI agent interrupted the call and said the agency was interviewing them.

Jefferson County Public Schools tweeted a list of 22 elementary, middle and high schools placed under lockout. All after-school activities were to go on as scheduled, except at Columbine, where they were canceled as a precaution, the district said.

Security alerts and safety drills have become commonplace in public schools across the United States in the years since the Columbine shooting as campus gun violence has grown more frequent.

In Denver public schools alone, there have been 22 lockdowns and 294 lockouts over the past two academic years, according to school data cited by the Denver Post.

He added that he wanted residents to know, "We have a lot of boots on the ground."