Family gathers as Nelson Mandela said to be on 'deathbed' 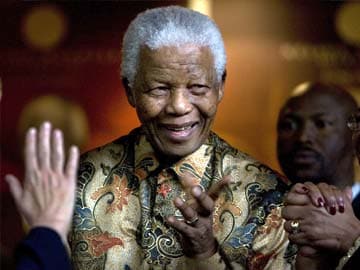 Johannesburg: Friends and relatives of ailing South African icon Nelson Mandela gathered Thursday at his Johannesburg home where the 95-year-old is said to be on his "deathbed".

Two of Mandela's grand-daughters and a close family friend Bantu Holomisa were among those seen entering the house, which was flanked by more than a dozen cars ferrying visitors and military personnel.

The reason for the large-than-usual gathering was not made public, but it comes shortly after Mandela's daughter Makaziwe described her father as fighting from his "deathbed," but still being "very strong" and "very courageous".

"Even when there are moments when you can see he's struggling, but the fighting spirit is still there with him," she said earlier this week.

Mandela has been receiving around the clock intensive care from military and other doctors since September, when he was discharged from a nearly three month hospital stay for a lung infection.

Grandson Ndaba recently told a local broadcaster that Mandela was "not doing well at home in bed".

Another of Mandela's grandsons, Mandla had a planned court appearance for Friday delayed as he made his way to Johannesburg.

"His lawyers have made arrangements that he presents himself to court on the 12th of December," Luxolo Tyali, National Prosecuting Authority spokesman told AFP.

Mandla was due to appear in court in the Eastern Cape to answer charges of assault with intent to cause grievous bodily harm and pointing a firearm related to a road incident in October.

Mandla later told South African news agency SAPA that he was not aware of any urgent meeting at the home.

Mac Maharaj, spokesman for the presidency which is the official channel for updates on Mandela's health said his condition of stable but critical was unchanged.

"My last update stands," he said.

The prosecution said Mandla's court delay, which was arranged on Thursday, was normal practice but did not give details of the lawyers' discussions.

"It's a normal practice more especially when someone is not around because he's apparently not in the province so we do understand," said Tyali.

It is the latest court drama to hit Mandela, who has been embroiled in legal dramas over grave tampering in a bitter family feud and bigamy.

Promoted
Listen to the latest songs, only on JioSaavn.com
He is chief in the far-flung village where his grandfather, South Africa's first black president, was born.