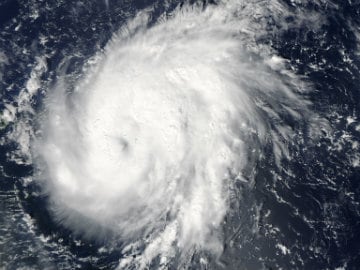 Hamilton Bermuda: The eyewall of Hurricane Gonzalo made a direct hit on Bermuda on Friday evening pounding the Bermuda coast with high waves, driving rain and gusting winds, becoming the strongest storm to hit the tiny Atlantic island chain in a decade, according to the U.S. National Hurricane Center.

"At least part of the island, if not the entire island, is going to be in the eye," said hurricane center specialist Stacy Stewart. "It's a very large eye."

Gonzalo was swirling about 40 miles (65 km) southwest of the British islands with sustained winds of 115 miles per hour (185 kph), down from 140 miles per hour earlier in the day, the forecasters said.

The northern wall of the 35-mile wide eye of Gonzalo hit Bermuda shortly before 6 p.m. EDT, with hurricane force winds extending up to 60 miles (95 km) from the center.

The low-lying archipelago has a total area of only 21 square miles (54 sq km).

Gonzalo peaked on Thursday as a Category 4 hurricane with 145 mph winds (230 kph), and is expected to continue weakening throughout Friday and into the weekend.

Bermuda, a tourist destination and affluent insurance industry hub about 640 miles (1030 km) off the U.S. east coast, is still recovering from Tropical Storm Fay, which swept over the islands early on Sunday with near hurricane-force winds of 70 mph (110 kph).

The governor of Bermuda, George Ferguson, advised the territory's 65,000 residents on Friday to stay off the roads and listen to emergency bulletins.

"I wish everyone all the best, for the next 24 hours. Good luck, and look after each other," he said in an emergency broadcast.

A British Royal Navy warship, HMS Argyll, was heading for Bermuda to help with post-Gonzalo relief efforts, the government said.

Linda Cook, 40, from Warwick parish, described watching Fay blow the roofs off three houses on Sunday and said she did not know what to expect from Gonzalo. "It's my first hurricane and I'm terrified," she said.

The "scariest thing," she said, was the amount of debris left after Fay.

Gonzalo is the Atlantic's first Category 4 hurricane since 2011.

"The good thing is that of all the places in the Atlantic hurricane alley Bermuda is the best equipped to withstand a strike by a major hurricane. They have very strict building codes," said Jeff Masters, a hurricane expert with private forecaster Weather Underground.

Hurricane Fabian, which pummeled the island in 2003 and caused $300 million in damage, was a Category 3 storm, he said.

The hurricane center said it expected "significant coastal flooding," noting that Fabian produced an estimated 10 feet (3 meters) of storm surge when it moved over Bermuda.

Promoted
Listen to the latest songs, only on JioSaavn.com
The hurricane forced NASA to delay by at least three days its next cargo run to the International Space Station, which flies about 260 miles (418 km) above Earth because key tracking equipment is on Bermuda.

Gonzalo has already wrought destruction in the Caribbean, tearing off roofs in Antigua, killing an elderly sailor and damaging some three dozen vessels in St. Maarten.
© Thomson Reuters 2014