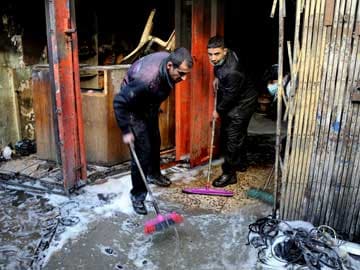 Civilians clean up after a parked car bomb went off at a commercial center in Khilani Square in central Baghdad, Iraq.

Baghdad: Multiple explosions rocked Baghdad on Wednesday, killing at least 34 people and sending plumes of smoke into the sky across the street from a major government building in a brazen reminder of the ability of insurgents to penetrate the heart of the capital.

The attacks come as al-Qaida-led militants are battling for control of mainly Sunni areas to the west in the first test of the Shiite-led government to maintain security in the country more than two years after the withdrawal of U.S. troops.

The deadliest of Wednesday's attacks took place across the street from the high-rise building housing the Foreign Ministry, shattering the windows of nearby apartment buildings. Two parked car bombs went off simultaneously in different parking lots, killing at least 12 people, including three policemen, and wounding 22, a police officer said.

Shortly afterward, a suicide bomber blew himself up in a nearby falafel restaurant frequented by officials or visitors waiting for security escorts to take them inside the Green Zone, a walled-off area that houses the prime minister's office and the U.S. and other foreign embassies.

Five people were killed and 12 wounded in that attack, the officer said.

All the roads leading to the blast sites place were sealed off by police as workers cleared debris and washed away bloodstains from the sidewalks.

Another parked car bomb exploded in Khilani Square, a busy commercial area in central Baghdad, killing five people and wounding 11, another police officer said. Security forces sealed off the area as firefighters struggled to put out the blaze ignited by the bombing. Smoke billowed from several stores and stalls as vendors hurriedly stuffed their goods into big bags and carried them away on their backs.

Shortly before sunset, a triple car bombing struck an outdoor market in the mainly Shiite suburb of Jisr Diyala in southeastern Baghdad, killing nine people and wounding 24. Minutes later, a rocket landed near the western gate of the green zone, killing one passer-by and wounding seven others, police said.

Nobody claimed responsibility for the attacks, but car bombings and suicide attacks targeting government buildings, security forces and Shiites are typically carried out by al-Qaida's affiliate in Iraq. In August 2009, the group claimed responsibility for massive suicide attacks on the Foreign Ministry as well as the Finance Ministry that killed more than 100 people.

The network now known as the Islamic State of Iraq and the Levant has been emboldened by the successes of its fellow militants in the civil war next door in Syria and by widespread Sunni anger at the government in Baghdad.

A bomb went off later inside a cafe in the mainly Sunni neighborhood of Dora, killing two people and wounding six, officials said. It was unclear who was responsible for that attack. Sunni insurgents frequently target rivals within the community who have allied with the government. Shiite extremists also sometimes plant bombs in Sunni areas, raising fears of a new wave of retaliatory violence that pushed the country to the brink of civil war in the years following the 2003 U.S.-led invasion that toppled Saddam Hussein.

Medical officials confirmed the casualty figures. All officials spoke on condition of anonymity because they were not authorized to talk to media.

Iraqi Interior Ministry spokesman Saad Maan Ibrahim said the recent attacks in Baghdad represent "a futile reaction by the terrorist groups toward the defeats they are suffering at the hands of the security forces in the western Anbar province."

Since late December, al-Qaida-led militants have taken over parts of the Anbar provincial capital of Ramadi and the center of nearby Fallujah, prompting a standoff with government soldiers.

More than 200 militants have been killed in airstrikes and clashes with soldiers since the government and allied tribes launched an offensive to wrest control of the cities in Anbar province on Jan. 26, according to the Iraqi Defense Ministry.

The government has not provided casualty figures for security forces, but the Islamic State of Iraq and the Levant has claimed responsibility for the execution-style killings of four Iraqi commandos near Fallujah last month.

Human Rights Watch condemned the killings, which were recorded on a video that shows the men being forced to kneel, then shot in the back of the head. Security forces found the bodies of the four soldiers in the village of Bubali, a day after it was retaken by Iraqi troops. The New York-based advocacy group called the killings along with car bombs and suicide attacks part of a "campaign of widespread and systematic murder that amounts to crimes against humanity."

It also criticized government forces for using what it called excessive force in responding to the violence, warning "the government's flawed logic of committing abuses in the name of security only continues the cycle of violence, whose chief victims are civilians."

In Washington, Brett McGurk, Deputy Assistant Secretary for Iraq and Iran, told the House Foreign Affairs Committee that the Iraqi government's efforts to support tribal leaders fighting the Islamic State of Iraq and the Levant in Ramadi were succeeding. "In recent weeks, we have seen a new level of commitment from the government of Iraq to mobilize the local population against ISIL," McGurk said.

Promoted
Listen to the latest songs, only on JioSaavn.com
He said the situation in Fallujah was far more serious with hundreds of ISIL fighters joining former insurgent groups to control the inner city and nearby towns. He said Iraqi soldiers trying to set up a cordon from the outskirts of the city in coordination with local tribes face well-trained snipers.

"At this moment, Fallujah is the scene of a tense standoff," he said, adding that ISIL is trying to move into Baghdad and remains a threat to the U.S. as well.