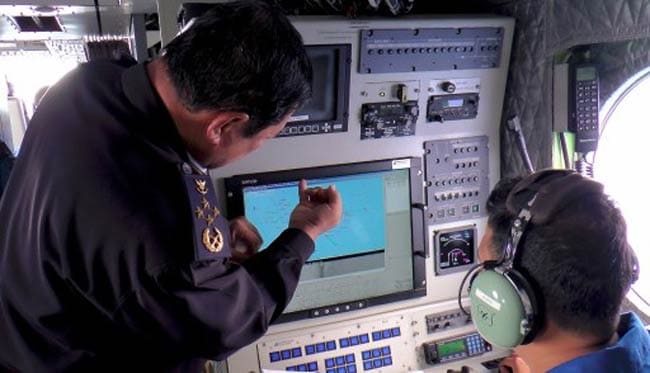 Hong Kong: If the missing Malaysia Airlines jetliner flew north over the Asian mainland after it lost contact with ground controllers on March 8, it would have had a difficult time avoiding detection by Chinese, Indian or U.S. radar, current and former military officers say. (Why do airplane transponders have an 'off switch?')

Investigators say that automated signals from the jet, a Boeing 777, that were picked up by a satellite more than seven hours after the plane took off indicate that by then it must have been somewhere near one of two broad arcs on the map. One arc stretches from northern Thailand and Laos through China to Kazakhstan in Central Asia; the other extends from western Indonesia into the Indian Ocean west of Australia. (Malaysia appeals to neighbours for sensitive military data)

The northern arc crosses some of the most closely defended borders in the world. Experts on the radar systems in use in the area say that a Boeing 777, which has a large radar profile, would more likely than not have been detected by Chinese and Indian air defense forces and by U.S. forces in Afghanistan.(Searchers draw blank in southern search for Malaysia plane)

China, the original destination for the flight, is guarded by military radar systems at high elevations in its border areas, and even in its interior, where the People's Liberation Army controls most of the country's airspace. The border between India and Pakistan is highly militarized, and radar experts and Indian military officials discounted the possibility that a jetliner could pass through the area undetected. Farther northwest, the U.S. Air Force has its own radar installations in Afghanistan to protect air bases there from intruders.

"It is not out of the realm of possibility that you could pull this off, but everything would have to go your way," said Sean O'Connor, a former intelligence analyst for the Air Force who studies air defense systems. "I wouldn't be looking through China and that northern route." (What if the missing Malaysia plane is never found?)

It is difficult to get a complete picture of the radar capabilities of countries in the region because military officials are unwilling to disclose details of their air defense systems. But experts said that the military forces arrayed in the Asian interior, especially in China, India, Pakistan and Afghanistan, would not be likely to overlook or ignore unidentified aircraft.

That stance contrasts with Southeast Asia, where the flight originated. Malaysian military operators took no action when their radar detected an unidentified aircraft traveling across the country, not even when it approached the island of Penang, one of Malaysia's most populous urban areas. That aircraft is now thought to have been the missing plane, Flight 370, but the significance of the radar traces was not recognized until hours later.

Thai military radar at three bases also tracked an unidentified contact moving west  across the peninsula the country shares with Malaysia on March 8, but officials did not say so until Tuesday, 10 days after Flight 370 disappeared.

And a senior Indian military officer said it was possible that radar on the country's islands in the Bay of Bengal could have missed the plane, which was last plotted flying in their general direction.

China though, has radar installations arrayed on mountains with overlapping coverage and the ability to look deep into neighboring countries, according to Mark Stokes, a former U.S. military attache in China who is now the executive director of a defense research group, the Project 2049 Institute in Arlington, Va. (China rules out terror ties among its citizens on jet)

The Chinese are probably "a little bit more on the ball," Stokes said.

An aircraft spotted on radar whose transponders were not "squawking," or emitting identifying information, the way Flight 370 had gone silent after turning off course, would surely attract the attention of the Chinese forces, according to Stokes. "I would say there is a high degree of likelihood that the Chinese surveillance system would pick it up," he said.

China's network is especially intensive north of Thailand, Burma and Laos in Yunnan province, where many of China's nuclear missiles are based, Stokes and O'Connor said in separate interviews.

Hong Lei, a spokesman for China's Foreign Ministry, told reporters in Beijing on Tuesday that China was using satellites to hunt for any sign of the missing airplane. Asked whether it could have flown through China undetected, Hong said, "The relevant work of the investigation is currently being carried out."

The Indian radar systems in the Andaman and Nicobar Islands might have missed the plane, the senior Indian military official said, because the islands are "not a tense area." But analysts said India's air defenses in the north, near China and Pakistan, are more robust - an opinion shared by one Indian air force pilot who asked not to be identified because he was not authorized to speak to reporters.

"There is no way or the slightest possibility of our radars having missed the plane," the Indian pilot said. "We do not have an open air policy. Any blip, the slightest, has to be given attention. Most of our radars are semi-automated. If there is any aircraft not identified by virtue of its registration or identification, there will be an instant reaction at our end."

Promoted
Listen to the latest songs, only on JioSaavn.com
One way the aircraft might have tried to elude detection, Stokes said, would be to have broadcast bogus identification signals, such as those for a different commercial aircraft on a regular route. Such a "spoof" might well have been spotted, but there would be at least a chance of slipping through.

All told, though, the odds are heavily against the missing plane having reached the northern search arc unnoticed, said O'Connor: "I would be more inclined to look at that southern route."
© 2014, The New York Times News Service