Larry Nassar, who is also serving a 60-year federal sentence for child pornography convictions, pleaded guilty to two sets of molestation charges in Michigan's Ingham and Eaton counties and had to be sentenced in each case. 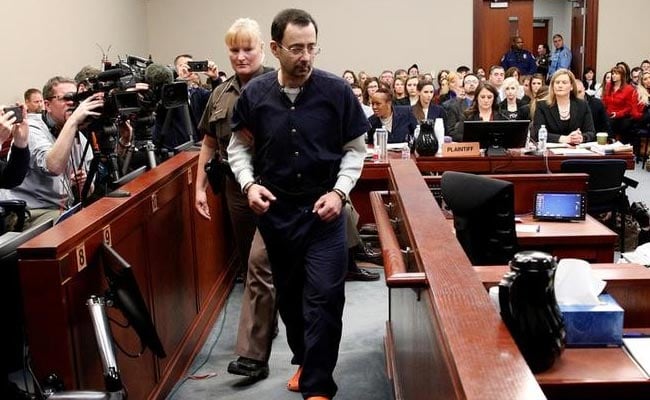 Charlotte: Former USA Gymnastics doctor Larry Nassar was sentenced to an additional 40 to 125 years in prison in a Michigan courtroom on Monday for sexually abusing young female gymnasts, following an earlier sentence of up to 175 years last month.

The case against Nassar has sparked various investigations into why the US Olympic Committee, the sport's governing body USA Gymnastics, and Michigan State University, where he also worked, failed to investigate complaints about him going back years. High-level officials at USA Gymnastics and Michigan State have resigned in recent weeks as outrage over the scandal intensified.

Nassar, who is also serving a 60-year federal sentence for child pornography convictions, pleaded guilty to two sets of molestation charges in Michigan's Ingham and Eaton counties and had to be sentenced in each case.

After Nassar was led out in handcuffs, a parade of victims lined up to hug and thank Denhollander, who in her own victim statement had repeatedly asked, "How much is a little girl worth?"

"I got my answer," she told Reuters immediately after the sentencing. "It's worth the fullest extent of punishment justice can provide. That's what just happened here."

As with last month's proceeding in Ingham County, Monday's sentencing followed days of testimony from scores of Nassar's victims, who offered emotionally wrenching accounts of his abuse masquerading as medical treatment, sometimes with their own parents present in the exam room.

All told, the two sentencing hearings saw more than 200 victim impact statements, and prosecutors have said there are approximately 265 known victims in total.

Nassar offered a brief apology to his victims on Monday, saying, "The visions of your testimonies will forever be present in my thoughts."

But the judge, Janice Cunningham, said Nassar had again suggested in a pre-sentencing interview with authorities that he had not done anything wrong, even after he was sentenced in Ingham County.

"I am not convinced that you truly understand that what you did was wrong, and the devastating impact that you have had on the victims, their families and friends," Cunningham told an expressionless Nassar. "Clearly you are in denial. You don't get it."
© Thomson Reuters 2018
Comments
US Gymnastics DoctorLarry Nassar