In her interview with Todd, Manigault said she considered the offer an attempt to buy her silence. "They were not offering a real job," she said. 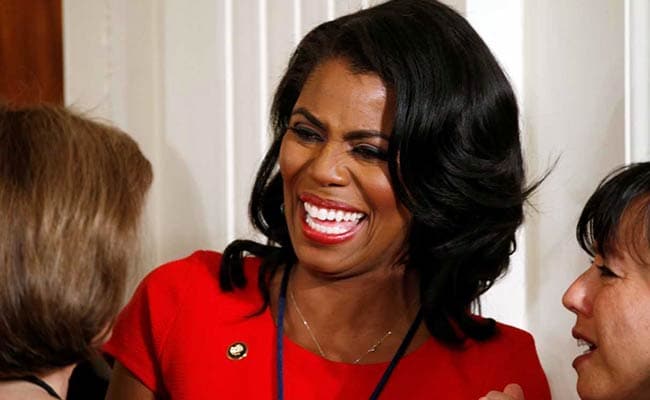 Omarosa Manigault repeated that Trump is a "racist, misogynist and bigot," (Reuters)

Omarosa Manigault Newman, the fired White House aide seeking publicity for her new memoir about her time in the Trump administration, said in an interview Sunday that the way Chief of Staff John Kelly dismissed her involved a "threat" and played an audio recording of Kelly that she said she made in the Situation Room.

The recording was played on NBC News' "Meet the Press," where Manigault Newman was interviewed by Chuck Todd.

In the purported recording, which would constitute a serious breach of White House security, Kelly is heard complaining about her "significant integrity issues" and saying that he wants to make her departure "friendly" and without "any difficulty in the future relative to your reputation."

The Washington Post reported Friday that after being fired, Manigault Newman declined a $15,000-a-month job offer from President Donald Trump's campaign, which came with a nondisclosure agreement stating that she could not make disparaging comments about the campaign, Trump, Vice President Mike Pence, their families, any Trump or Pence family company or asset, and that the agreement would survive even if her contract expired, was canceled or she was fired. The Post obtained copies of what Manigault Newman said was the job offer and the companion agreement.

In her interview with Todd, Manigault Newman said she considered the offer an attempt to buy her silence. "They were not offering a real job," she said. "They told me I could work from home, if I wanted to work. They didn't care if I showed up."

In a statement Friday, White House press secretary Sarah Huckabee Sanders described the book as "riddled with lies and false accusations." On Saturday, Trump called Manigault Newman a "lowlife." Manigault Newman, who starred on Trump's show "The Apprentice," was fired from her administration position in December amid allegations of misconduct, including trying to stage her wedding photos on White House grounds.

Manigault Newman's purported recordings inside the White House - especially the Situation Room, which is supposed to be one of the most secure locations on Earth - represents a serious breach of security protocol, said Ned Price, a former National Security Council spokesman for the Obama administration.

The Situation Room "is the inner sanctum within an already-secure facility where the most sensitive of the most sensitive information is discussed," Price said. "It's where negotiations with Iran were hashed out. It's where contingency plans for nuclear launches have been developed. The fact that she was recording a conversation in there, really, raises alarm bells in the minds of people who have worked in that room."

Price said cellphones and recording devices are not allowed in the room, though aides are not screened before entering.

"It's a system based on honor and integrity, and there's a sign outside that says, 'Place your phones here,'" he said.

On Sunday, Manigault Newman did not address those issues.

She repeated what she asserts in the book: that Trump is a "racist, misogynist and bigot," a realization that she said dawned on her only as her rocky White House tenure came to an end.

Todd asked why she did not come to this conclusion sooner, noting that Trump had said many things over the years that people considered racist, including calling Mexicans "rapists" or saying that "both sides" were to blame for bloodshed during the white nationalist march in Charlottesville last year. Trump launched his political career advancing the "birther" conspiracy about President Barack Obama.

"Yes, I was complicit ..." said Manigault Newman, who was the highest-ranking black employee in the White House. "I had a blind spot when it came to Donald Trump. I wanted to see the best in him. Obviously, I failed miserably."

White House aides are exploring what punishment she could face for the purported recording in the Situation Room and in the building, according to a senior administration official.

Privately, many are wondering how many tapes she might have - and whether they are heard speaking on them.

Manigault has tapes of Trump speaking, a person familiar with the tapes said.