Agreement on a free trade pact has been made between two of the world's biggest economies, Japan and the European Union. 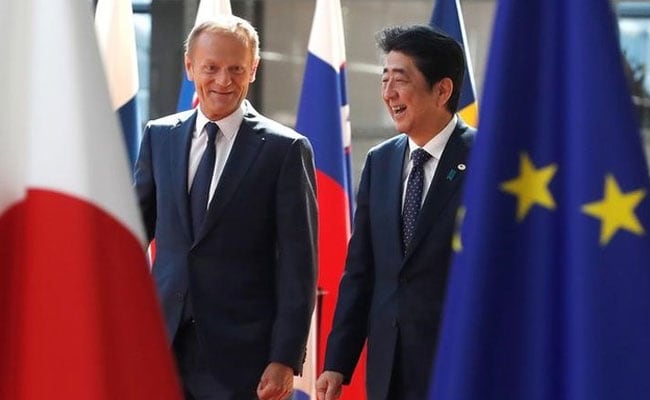 Agreement on a free trade pact has been made between European union and Japan.

Brussels: Japan and the European Union agreed on Thursday to a free trade pact, signalling their opposition to what they see as US President Donald Trump's protectionist turn.

Signed in Brussels on the eve of meetings with Trump at a G20 summit in Hamburg, the "political agreement" between two of the world's biggest economies is heavy with symbolism and leaves some areas of negotiation still to finish, though officials insist the key snags were overcome this week.

"We promised to do everything in our power to conclude political and trade talks between Japan and the European Union on the eve of the G20 summit. And we did it," European Council President Donald Tusk told a news conference.

In the works for four years, what will be known as the EU-Japan Economic Partnership Agreement, has been pushed over the line towards a final treaty signature in the coming months by the election of President Donald Trump and his moves to ditch a Pacific trade pact that included Japan and leave talks with the EU in limbo.

Fears of cheaper import competition for European carmakers and Japanese dairy producers were among the thorniest issues, but officials said they shared alarm at Trump's apparent shift away from multilateral open trading systems towards an aggressive "America First" policy.

"Together, we are sending a strong message to the world that we stand for open and fair trade. As far as we are concerned, there is no protection in protectionism," European Commission Presiden Jean Claude Juncker said.

Tariffs on much of their bilateral trade will be phased out over some years and other areas of commerce, such as Japan's public tender system, will be opened up.

Japanese Prime Minister Shinzo Abe said that with 40 percent of world trade, the EU and Japan would form the world's biggest open economic area, accounting for a third of global economic output.

One detail still to be ironed out in the coming months is how disputes arising from the treaty will be settled -- a touchy subject in Europe due to concerns that such pacts give too much power to big business.