Viktor Orban was virtually isolated as most of his 26 counterparts rounded on him in what one EU official described as an "in-depth and at times even emotional debate". 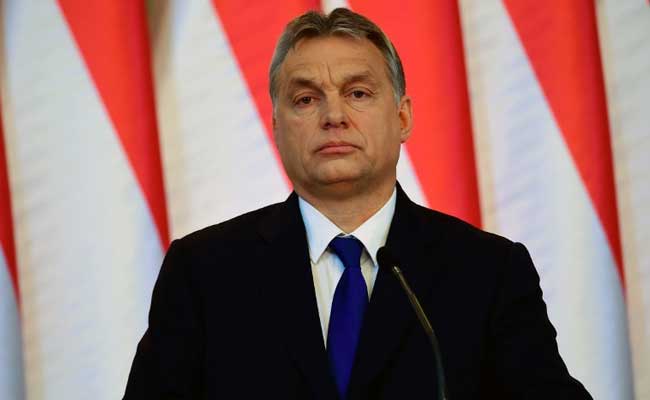 Hungary's Prime Minister Viktor Orban however was characteristically defiant in the room. (File)

EU leaders holding a summit Thursday attacked Hungary's Prime Minister Viktor Orban over a new law in his country banning LGBTQ content in schools, which they view as homophobic and contrary to EU values.

Orban was virtually isolated as most of his 26 counterparts rounded on him in what one EU official described as an "in-depth and at times even emotional debate".

The most strident was Dutch Prime Minister Mark Rutte -- who, on his way into the summit, had told journalists "for me, Hungary has no place in the EU anymore".

Facing Orban inside, Rutte said: "You have passed the line. This time it is too much," according to another EU official in the room.

Others joined in the criticism, delivering a scathing broadside to Hungary's nationalist leader, who has frequently clashed with Brussels and with EU counterparts over his socially conservative policies and perceived undercutting of democratic norms.

"Being homosexual is not a choice. Being homophobic is a choice. We cannot accept a legislation that is legitimising such a behaviour," Belgian Prime Minister Alexander De Croo was said to have told Orban.

The extraordinary attacks overshadowed the first day of the two-day summit, whose agenda also covered fraught ties with Russia and Turkey, and the bloc's handling of the coronavirus pandemic.

'Not a diplomatic discussion'

German Chancellor Angela Merkel said early Friday, after the lengthy first day came to an end, that "it was certainly a controversial, but very, very frank discussion".

She said "we all made it very clear here what fundamental values we are pursuing" and the European Commission "will now continue to deal with the Hungarian law".

Commission President Ursula von der Leyen said before the summit that her executive would challenge the basis of the law.

De Croo told journalists after leaving the summit that the haranguing of Orban was unprecedented at such gatherings.

"This was not a diplomatic discussion, this was quite confrontational," he said.

He added that only Poland and Slovenia -- the latter "a little bit" -- had offered Hungary support.

Orban however was characteristically defiant in the room.

As he headed into the summit on Thursday he insisted to journalists that his fellow leaders had misunderstood the legislation.

"This is not against homosexuality... It's about the right of the kids and the parents," he said.

"It's about how a child learns about sexuality... and decisions about that are exclusively the business of parents," he said.

Even before the summit, most EU countries -- 17 of them, including heavyweights Germany, France, Italy and Spain -- had made their criticism clear.

They signed a joint declaration raising "grave concerns" over the Hungarian law and a follow-up letter deploring any threats to "the principle of non-discrimination on grounds of sexual orientation".

UN chief Antonio Guterres, who attended the opening of the summit, also said of the Hungarian law: "No discrimination is acceptable in any circumstances, and any discrimination against LGBTIQ+ people is totally unacceptable in our modern societies."

But its final draft contains amendments that critics say conflate paedophilia with homosexuality.

The law bans the "promotion of homosexuality" to under-18s, and says that only government-approved instructors are allowed to teach sex education in schools.

Firms cannot run ads showing support for the LGBTQ community if they are seen as targeting minors, according to the law.