EU to tighten sanctions on North Korea after nuclear test 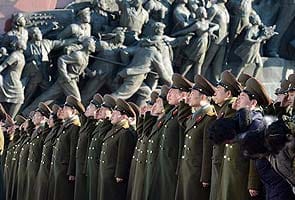 Brussels: The European Union will tighten sanctions on North Korea to curb trade in gold and diamonds and crack down on financial links in protest at Pyongyang's recent rocket launch and nuclear bomb test, EU diplomats said on Friday.

Diplomats have agreed on a new list of sanctions which will be formally approved by EU foreign ministers on Monday.

Diplomats from Britain and several other EU countries with embassies in North Korea are also expected to show their displeasure by boycotting Saturday's celebrations of the birth of late leader Kim Jong-il, one EU diplomat said.

North Korea drew widespread international condemnation this week by conducting its third nuclear test in defiance of United Nations resolutions. The test advanced it further along the path towards developing a workable long-range nuclear missile.

It followed a widely criticised rocket launch in December.

Reuters reported earlier that North Korea has told its key ally, China, that it is prepared to stage one or even two more nuclear tests this year in an effort to force the United States into talks.

The 27-nation EU will adopt expanded sanctions approved by the UN Security Council in January but will add others of its own, according to EU diplomats. It will also say that it is considering further measures.

The European Union already has an extensive list of sanctions on North Korea, including on technology that could be used in a nuclear or ballistic missile programme.

The new EU sanctions will prohibit trade in gold and other precious metals, and diamonds, with North Korean public bodies and will ban trade in new public bonds issued by North Korea, the diplomats said.

North Korea is one of the world's most isolated states and the diplomats could not say if North Korean banks had any branches in the EU.
© Thomson Reuters 2013