Europe Union, Japan To Sign Massive Trade Deal As US Puts Up Barriers

The European Union-Japan deal will send a "strong signal to the world" against US protectionism, says Trade Commissioner Cecilia Malmstrom. 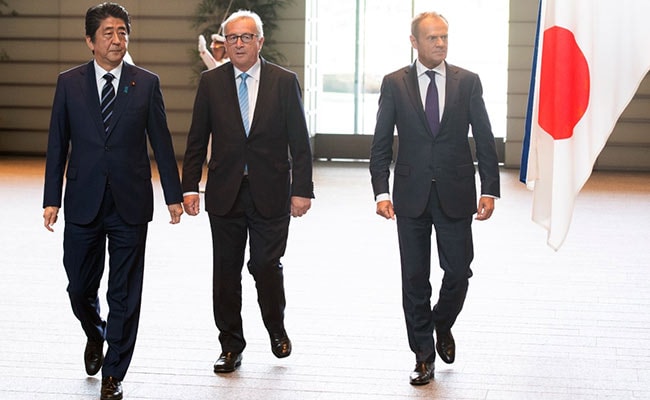 The European Union's top officials arrive in Japan Tuesday to sign the single market's biggest trade deal ever and present a united front as Washington upends the international trade order.

"It is the common duty of Europe and China, but also America and Russia, not to destroy (the global trade order) but to improve it, not to start trade wars which turned into hot conflicts so often in our history," Tusk said Monday in Beijing.

"There is still time to prevent conflict and chaos."

The deal, agreed last December, is "the biggest ever negotiated by the European Union," according to Commission spokesman Margaritis Schinas.

"This agreement will create an open trade zone covering nearly a third of the world's GDP," he said.

The EU -- the world's biggest single market with 28 countries and 500 million people -- is trying to boost alliances in the face of Trump's protectionist administration.

The EU-Japan deal will send a "strong signal to the world" against US protectionism, EU Trade Commissioner Cecilia Malmstrom said recently.

Trump's administration has angered traditional allies like the EU and Japan by imposing trade tariffs, while rattling international markets by threatening a trade war with China.

On Sunday, the US president fuelled rising rancour by labelling the EU, along with Russia and China, "a foe" of the United States, and repeating his assertion that the EU has "really taken advantage of us on trade."

The EU officials and Japan will also look to present a united front against US tariffs on steel and aluminium, which Tokyo has called "deplorable."

Under the trade agreement, the EU will open its market to Japan's auto industry, with Tokyo in return scrapping barriers to EU farming products, especially dairy.

The EU is seeking access to one of the world's richest markets, while Japan hopes to jump-start an economy that has struggled to find solid growth.

Japan's Prime Minister Shinzo Abe had been scheduled to sign the deal in Brussels last week, but cancelled his trip after devastating floods that killed more than 220 people.

(Except for the headline, this story has not been edited by NDTV staff and is published from a syndicated feed.)
Comments
European Union (EU)Massive Trade Deal with Japan