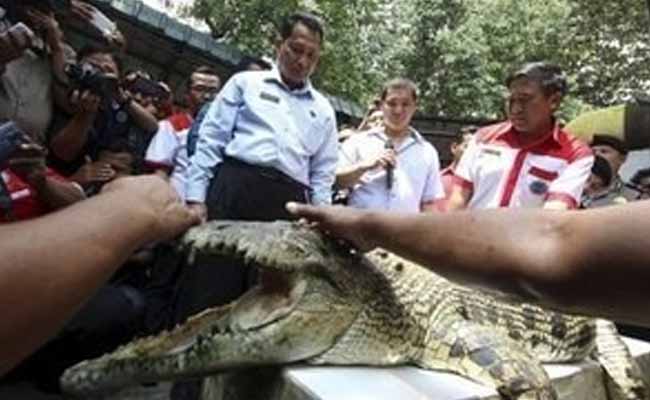 The head of the Indonesia's National Narcotics Board Budi Waseso (L) looks at a crocodile during a visit to a crocodile farm in Medan, North Sumatra. (Reuters Photo)

JAKARTA: When Indonesia's anti-drugs czar announced plans to guard a death-row prison island with crocodiles, the government rushed to explain that it was just a joke, but today Budi Waseso said he was now thinking of using tigers and piranha fish too.

Media quoted the National Narcotics Agency (BNN) chief as saying that he had already obtained two crocodiles from a farm to study their power and aggression and may ultimately put as many as 1,000 in place to keep convicts from escaping.

"The number will depend on how big the area is, or whether perhaps to combine them with piranhas," he told reporters, according to the rimanews.com portal. "Because the (prison) personnel numbers are short we can use wild animals. We could use tigers too - for conservation at the same time."

Piranha fish, meat-eaters with sharp teeth and powerful jaws, are indigenous to South America and are not found in Indonesia.

Waseso and officials at his office were not immediately available to comment on the reports.

Indonesian President Joko Widodo declared a war on what he has dubbed a "narcotics emergency" after taking office a year ago, basing his campaign on a study that showed at least 40 people a day were dying from drug use.

He has repeatedly refused clemency to traffickers and more than two dozen, mostly foreign, drug convicts have been executed this year after a five-year moratorium on the death penalty.

In separate comments on the TVOne channel, Waseso rejected critics who said his plans to use animals as jailors were trampling on the human rights of convicts.

"We have to look at the whole problem," he said. "These people are murderers - mass murderers. Shouldn't we also look at the human rights of their victims?"
© Thomson Reuters 2015