The shooting inflamed the nation's long-running debate on gun rights as defined in the Second Amendment of the U.S. Constitution. Students prepare to enter High School for the first time since the mass shooting. (Reuters)

PARKLAND, Fla.: Survivors of the second-deadliest U.S. public school shooting were brought to tears on Wednesday by empty seats and missing friends at roll call as they returned to their Florida high school two weeks after 17 students and educators were massacred there.

Upon emerging from a half-day of classes intended to ease their return after the tragedy, some of the roughly 3,000 teens who attend Marjory Stoneman Douglas High School in Parkland, Florida, described their emotional day.

Samuel Safaite, a 15-year-old sophomore, said students in his Spanish class broke down when the teacher took attendance and read out the name of Luke Hoyer, a 15-year-old slain in the attack.

"A lot of people started crying because we all knew he was gone," Safaite said. "It was difficult for a lot of people."

Many of the students carried white flowers when they arrived at the school in the morning and wove through hundreds of uniformed police officers providing security for their return. Emotional-support dogs also were on hand to provide comfort.

Nikolas Cruz, 19, who had been kicked out of the school for disciplinary reasons, is accused of carrying out the rampage.

The shooting inflamed the nation's long-running debate on gun rights as defined in the Second Amendment of the U.S. Constitution. It also sparked a youth-led gun control movement featuring survivors of the attack, who have already lobbied lawmakers in Florida's capital Tallahassee and Washington, D.C.

"We will push for change and our children are going to be the change agents," said Jeannine Gittens, 44, who drove to the school to be there to meet her son Jevon, a 16-year-old junior, when he arrived on the bus. "We see that things have to change and we are not going to stop until they do." 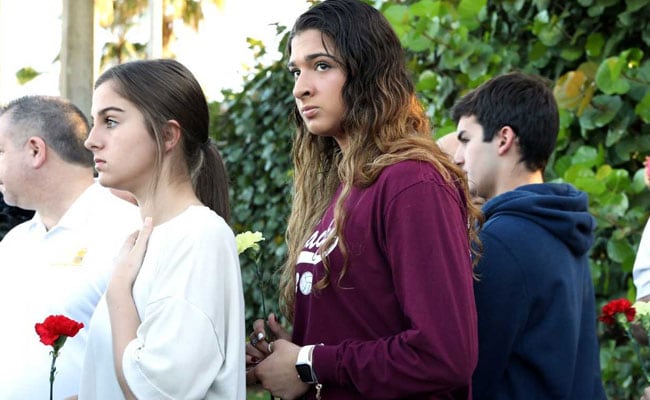 Many of the students carried white flowers when they arrived at the school in the morning.

The building where most of the victims died was closed, surrounded by a chain-link fence decorated with signs reading "MSD strong" and "Pray for Douglas." Florida lawmakers are contemplating tearing it down and replacing it with a memorial to the victims.

Hard To Move On

As she left the school with her mother and 18-year-old brother, sophomore Marisa Lopez, 16, said some friends were talking about leaving the school.

"I don't think that some people are ready to move on," Lopez said, adding that some of her friends had witnessed the shooting of Scott Beigel, a 35-year-old social science teacher who was one of the three adults killed in the attack. "I just don't know if some of them are ever going to get over it."

President Donald Trump met with a group of 17 Republican and Democratic lawmakers with a broad range of views on guns on Wednesday, and asked for a broad bill to address school shootings.

The Republican president, endorsed by the powerful National Rifle Association gun lobby in his 2016 campaign, has been wary of angering voters who oppose any curbs on gun ownership, particularly ahead of the November elections in which his party's control of Congress will be at stake. 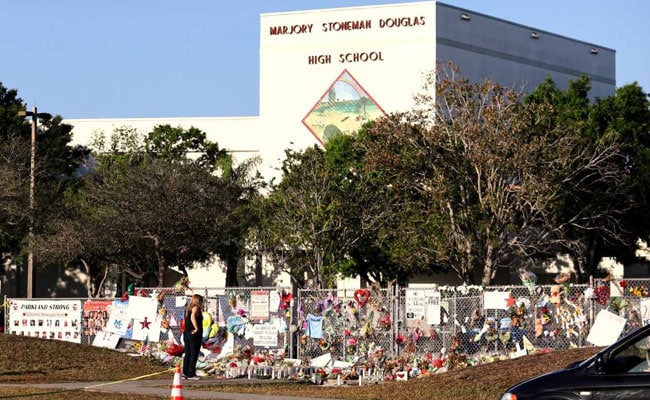 "We're going to come up with some ideas," Trump said. "Hopefully we can put those ideas in a very bipartisan bill. It would be so beautiful to have one bill that everybody can support, as opposed to - you know - 15 bills. Everybody's got their own bill."

As school shootings become a growing concern, police in Georgia on Wednesday arrested a high school teacher who barricaded himself inside a classroom and fired a handgun when the principal tried to force the door open.

Promoted
Listen to the latest songs, only on JioSaavn.com
The debate over how to respond to the school shootings pulled in corporate America, with gun retailer Dick's Sporting Goods Inc <DKS.N> on Wednesday saying it would no longer sell assault-style rifles, the type of weapon used in four of the five deadliest mass shootings by a single gunman in U.S. history, as well as Parkland.
© Thomson Reuters 2018

(This story has not been edited by NDTV staff and is auto-generated from a syndicated feed.)
Comments
Flordia ShootingDonald Trump Gun Control