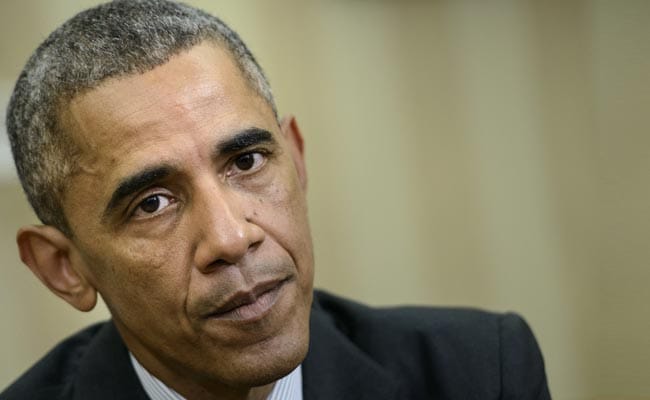 US President Barack Obama is expected to issue the third and most significant veto of his presidency today, embracing raw executive power in the twilight of his administration.

"This is even better than the veto pen," said a steely Obama, griping a silvery hockey stick gifted to him in the midst of another fight with Republicans.

Combative and confident, it is just the sort of defiant tone that Obama has adopted since Republicans seized control of both houses of Congress.

Since last November, Obama has threatened to veto more than a dozen Republican-backed bills - from tougher sanctions on Iran to rules undercutting his hallmark healthcare reforms.

Today he is likely to make good on another veto promise, rejecting the Keystone XL pipeline, which would bring oil from Canada to the United States.

While flexing his veto power Obama has also embraced the use of controversial executive orders, which bypass hostile legislators to make law by decree.

In one of over 200 orders so far, Obama protected five million illegal immigrants from deportation, leading to a fierce legal challenge from Republicans.

There is a "clear political imperative" for Obama's more muscular use of presidential power, said Julian Zelizer, a Princeton University professor.

"The opposition is strong, time is limited and you can't do much pro-actively.

"It's important for Democrats not to end the last two years (of Obama's term) with Republicans not only controlling Congress, but doing a lot."

Yet despite the tough talk, Obama is a relative neophyte when it comes to the ultimate expressions of presidential political power.

Before Keystone, the 44th commander-in-chief used his veto power only twice in six years, to reject rules on notarizations and a defense funding resolution that had become obsolete.

That is fewer vetoes than any president since James Garfield, who was in office in 1881 for 200 days - close to half of them spent (unsuccessfully) trying to recover from an assassin's bullet.

According to Senate records, you have to go back two centuries - to the age of the Seminole wars, the first Mississippi steam boats and the presidency of founding father James Monroe - to find a two-term president who has issued fewer vetoes.

At the same time, Obama has averaged around 33 executive orders a year, the lowest rate since Grover Cleveland's first term ended in 1889, according to the American Presidency Project.

"I think there is genuine hesitance about overreaching," said Zelizer, pointing to Obama's 2008 presidential campaign, when he repeatedly voiced concerns about George W. Bush's use of executive power.

"He also ultimately believed that he would be able to get the legislative process moving. It took him a long time to realize that is not the case."

Obama's low veto tally could also be a sign of his political success.

For most of Obama's time in the Oval Office Democrats had a strangle hold on Congress.

"In Obama's first two years in office, his party had big majorities in the House and Senate," said Kyle Kondik of the University of Virginia's Center for Politics.

"Given how ideologically similar Obama and congressional Democrats are, Congress generally wasn't going to pass something through both houses that was not also supported by the president."

Even until last November, Obama had the buffer of a Democrat-controlled Senate, which prevented Republican-backed bills from landing on the Resolute desk.

Minority lawmakers' willingness to use procedural rules to stall legislation may also have helped Obama avoid executive action, according to Sarah Binder of the Brookings Institution.

"I suspect that the minority's increased willingness to filibuster majority party priorities in the Senate also limits the frequency of veto bait sent up to the White House," she said.

Promoted
Listen to the latest songs, only on JioSaavn.com
With Republicans now in control of both houses, Obama could yet emulate Bush, who vetoed 11 bills in his last two years following the Democratic takeover of Congress in 2006.