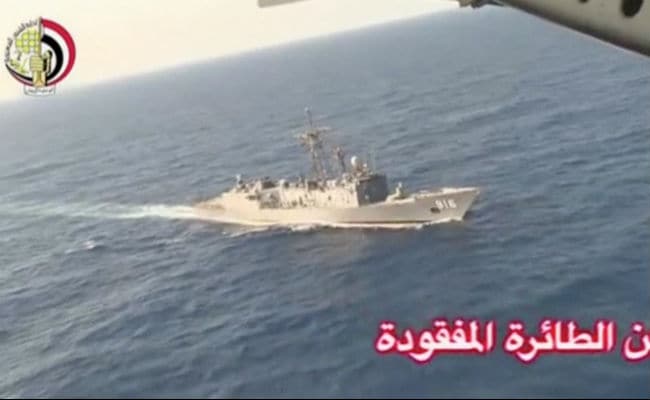 An Egyptian military search boat takes part in a search operation for the EgyptAir plane in this still image taken from video May 19, 2016. (Egyptian Military/Handout via Reuters TV)

CAIRO: Egypt said on Friday that its navy had found human remains, wreckage and the personal belongings of passengers floating in the Mediterranean, confirmation that an EgyptAir jet had plunged into the sea with 66 people on board.

President Abdel Fattah al-Sisi offered condolences for those on board, amounting to Egypt's official acknowledgement of their deaths, although there was still no explanation of why the Airbus had crashed.

"The Egyptian navy was able to retrieve more debris from the plane, some of the passengers' belongings, human remains, and plane seats," the Civil Aviation Ministry said in a statement.

The navy was searching an area about 290 km (180 miles) north of Alexandria, just south of where the signal from the plane was lost early on Thursday.

There was no sign of the bulk of the wreckage, or of a location signal from the "black box" flight recorders that are likely to provide the best clues to the cause of the crash.

EgyptAir Chairman Safwat Moslem told state television that the current radius of the search zone was 40 miles, giving an area of 5,000 sq miles, but that it would be expanded as necessary.

A European satellite spotted a 2 km-long oil slick in the Mediterranean, about 40 km southeast of the aircraft's last known position, the European Space Agency said.

Egyptian Prime Minister Sherif Ismail said it was too early to rule out any cause for the crash. The aviation minister said a terrorist attack was more likely than a technical failure, but offered no evidence.

Although early suspicion centered on Islamist terrorists who blew up another airliner over Egypt seven months ago, no group had claimed responsibility more than 36 hours after the disappearance of flight MS804, an Airbus A320 flying from Paris to Cairo.

CNN reported on Friday that flight data, from an automatic system called the Aircraft Communications Addressing and Reporting System (ACARS), suggested there were smoke alerts aboard the EgyptAir jet minutes before it crashed.

Two US officials told Reuters an electronic sensor system had detected some kind of disturbance outside the jet around the time investigators believe it began falling from cruising altitude. They could not confirm CNN's report that smoke had been detected inside the cabin.

One of the officials said the disturbance outside the aircraft may have been caused by its sudden and rapid breakup, but also could have been generated by some kind of mechanical fault or accident or a possible explosion or attack.

The two officials asked for anonymity when speaking about the still-evolving investigation.

Terrorists have been fighting Egypt's government since Sisi toppled an elected Islamist leader in 2013. In October, the ISIS group claimed responsibility for blowing up a Russian airliner that exploded after taking off from an Egyptian tourist resort. Russian investigators blamed a bomb smuggled on board.

That crash devastated Egypt's tourist industry, one of the main sources of foreign exchange for a country of 80 million people, and another similar attack would crush hopes of it recovering.

The plane vanished just as it was moving from Greek to Egyptian airspace control. Greek Defence Minister Panos Kammenos said it had swerved radically and plunged from 37,000 feet to 15,000 before vanishing from Greek radar screens.

Officials from a number of US agencies told Reuters that a US review of satellite imagery so far had not produced any signs of an explosion. They said the United States had not ruled out any possible causes for the crash, including mechanical failure, terrorism or a deliberate act by the pilot or crew.

Adam Schiff, the top Democrat on the US House Intelligence Committee, played down comments from US figures including likely presidential nominees Donald Trump and Hillary Clinton that terrorism was the most likely cause.

"At this point, we still can't corroborate the theory that terrorism brought it down or there was some structural problem with the plane," he told CNN.

"Certainly, the backdrop is suggestive of terrorism in the sense that we have the Russian plane in Sharm el-Sheikh and we have the aspiration we've seen time and time again, not only of ISIL (ISIS) now but of AQAP (al Qaeda), still very potent and still very determined to bring down aircraft.

"But the reality is, we don't have hard evidence that this was terrorism yet."

Hardline terrorists have targeted airports, airliners and tourist sites in Europe, Egypt, Tunisia and other Middle Eastern countries over the past few years.

Khaled al-Gameel, head of crew at EgyptAir, said the pilot, Mahamed Saeed Ali Shouqair, had 15 years' experience and was in charge of training and mentoring younger pilots.

"He comes from a pilot family; his uncle was a high-ranking pilot at EgyptAir and his cousin is also a pilot," Gameel said. "He was very popular and was known for taking it upon himself to settle disputes any two colleagues were having."

A Facebook page that appeared to be Shouqair's showed no signs of Islamist sympathies. It included criticism of the Muslim Brotherhood, repostings of articles supporting President Sisi and pictures of Shouqair wearing aviator sunglasses.

Two former senior crash investigators said the list of possible causes remained wide open and noted there had been cases where deliberate action had been suspected wrongly.

In 1996, a terrorism probe was launched after a TWA jumbo jet crashed off Long Island on the east coast of the United States, but investigators later found it had probably been brought down by a fuel tank explosion.

The EgyptAir plane was carrying 56 passengers, including one child and two infants, and 10 crew. They included 30 Egyptian and 15 French nationals, along with citizens of 10 other countries. The aircraft had made scheduled flights to Tunisia and Eritrea on Wednesday before arriving in Paris from Cairo.
© Thomson Reuters 2016