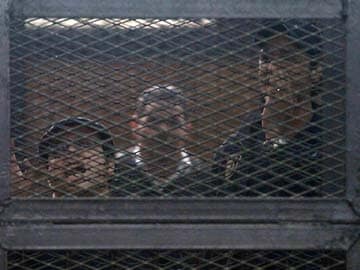 Cairo: An Egyptian appeals court on Monday upheld the jailing of three leading figures of the 2011 pro-democracy uprising, tightening a crackdown on secular activists opposed to the army-backed government.

Critics see their case as an attempt to stifle the kind of political street activism common since the uprising that ousted autocrat Hosni Mubarak three years ago, as Egypt prepares for presidential elections next month.

A court handed down three-year sentences to the three liberal activists, Ahmed Maher, Ahmed Douma and Mohamed Adel, in December for protesting without permission and assaulting the police.

The verdict was the first under a new law that requires police permission for demonstrations. The case stemmed from protests called in defiance of the law. The European Union and the United States had urged Egypt to reconsider the verdict.

The three men appeared in court on Monday inside a metal cage wearing blue prison suits and chanting: "Down, down with army rule, our country will always be free!"

They have one final chance to appeal to a higher court but analysts see little hope of the verdict being overturned.

'NAIL IN THE COFFIN'

"I was not expecting this sentence at all. I was certainly expecting it to be overturned. That is very bad news," said Dostour party spokesman Khaled Dawoud.

"This will definitely send a very negative signal to all the young people who supported the (2011) January Revolution."

Already pursuing a crackdown against the Muslim Brotherhood movement of deposed president Mohamed Morsi, the army-led authorities have arrested a number of secular activists in recent months for breaches of the new protest law.

"Today's verdict against three of the most recognised faces of the January 25, 2011, protests is one more nail in the coffin for Egypt's revolution," said Sarah Leah Whitson, executive director for Middle East and North Africa at Human Rights Watch.

"The appeals court has failed to undo the worst excesses of the government's campaign to crush dissent."

The U.S. State Department said the continued imprisonment of the trio ran counter to the Egyptian government's commitment to protect the universal rights of all Egyptians.

"We urge the Egyptian government to exercise its constitutional authority to commute these excessive sentences, which are not in line with the rights guaranteed in Egypt's new constitution, Egypt's international obligations or the government's own commitment not to return to Mubarak-era practices," State Department spokeswoman Jen Psaki said at a briefing in Washington.

Abdel Fattah al-Sisi, the general who toppled Morsi in July following mass protests against his rule, is expected to win next month's presidential election easily.

The former army chief's supporters see him as a decisive figure who can bring stability. Islamist and secular opponents say he has helped to turn Egypt back into a police state.

Security forces have killed hundreds of Brotherhood members and arrested thousands. Morsi and many other top leaders are on trial.

Promoted
Listen to the latest songs, only on JioSaavn.com
Western powers have called for democracy to be restored and for an end to human rights abuses, but there are no signs that they intend to exert the kind of pressure that might force change.