While rats, reptiles and insects are often eaten by families in rural areas, people in some urban areas are now being reduced to getting nutrition however they can. 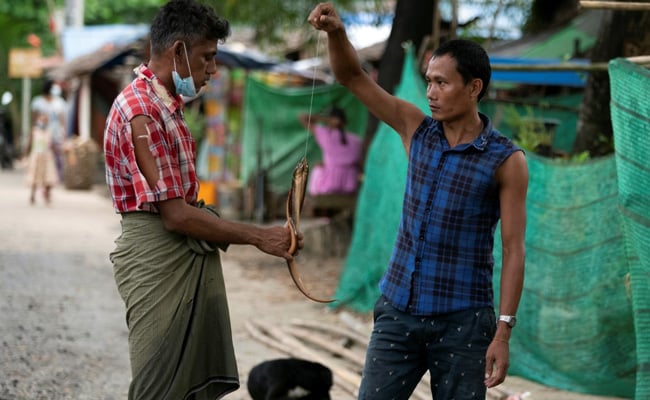 A man sells eels in a slum area of Yangon, Myanmar.

After the first wave of coronavirus hit Myanmar in March, 36-year-old Ma Suu closed her salad stall and pawned her jewelry and gold to buy food to eat.

During the second wave, when the government issued a stay-home order in September for Yangon, Ma Suu shut her stall again and sold her clothes, plates and pots.

With nothing left to sell, her husband, an out of work construction labourer, has resorted to hunting for food in the open drains by the slum where they live on the outskirts of Myanmar's largest city.

"People are eating rats and snakes," Ma Suu said through tears. "Without an income, they need to eat like that to feed their children."

They live in Hlaing Thar Yar, one of Yangon's poorest neighborhoods, where residents shine flashlights in the undergrowth behind their homes, looking for some night creature to stave off their hunger.

While rats, reptiles and insects are often eaten by families in rural areas, people in some urban areas are now being reduced to getting nutrition however they can.

With more than 40,000 cases and 1,000 deaths, Myanmar is facing one of Southeast Asia's worst coronavirus outbreaks, and the lockdown in Yangon has left hundreds of thousands of people, like Ma Suu, without work and precious little support. 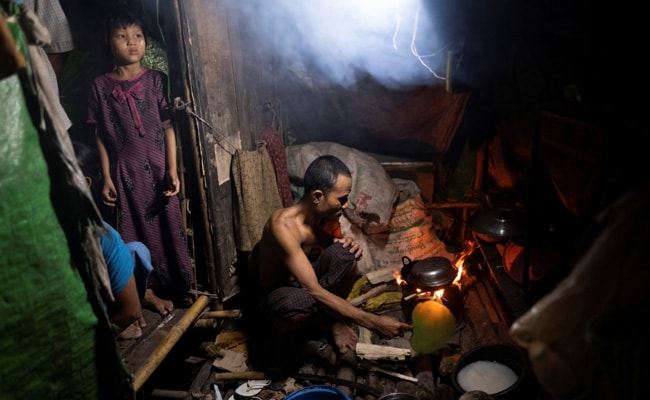 A man cooks dinner for his family in a shanty dwelling in Yangon, Myanmar.

Local administrator Nay Min Tun said in his part of Hlaing Thar Yar 40% of households had received aid but many workplaces were shut and people had become more desperate.

Myat Min Thu, the ruling party lawmaker for the area, said government aid and private donations was being distributed but acknowledged not everyone could be covered.

The crisis has cast a shadow over a general election planned for Nov. 8, though Nobel laureate Aung San Suu Kyi is still expected to win by a comfortable margin.

NOTHING BUT THE MARKET

Even before the pandemic, a third of Myanmar's 53 million people were considered "highly vulnerable" to falling into poverty, despite recent gains following the country's emergence from decades of ruinous isolation under the military junta.

The financial squeeze now threatens to plunge many back into poverty or squash their chances of getting out.

Poverty in the developing East Asia and Pacific region is set to rise for the first time in 20 years due to COVID-19, the World Bank said in September, with about 38 million expected to remain in or be pushed back into poverty.

Myanmar's government has offered poor households a one-off food package and three cash grants of $15 each as part of its relief plan, but families say it falls far short.

A survey by ONow Myanmar of more than 2,000 people across the country in April found 70% had stopped working and a quarter had taken out loans for food, medicine, and other essentials.

Sectors driving industralisation in Myanmar - including garment work and tourism - have come to a halt while remittances have dried up, said Gerard Mccarthy, a postdoctoral fellow at the Asia Research Institute in Singapore.

"Households already in dire debt from paying for medical treatment, schooling, sustaining the elderly and everyday survival...many will need to pay off these loans before they can begin spending on anything discretionary," he said.

Thant Myint-U, a Myanmar historian, rued the absence of a proper social safety net and the collapse of villages' traditional welfare systems.

"For tens of millions of Myanmar's poor, there is nothing other than the market, which in the good times provides opportunities for informal work in the cities or migration abroad but during a downturn is leaving the poorest with little more than the shirt on their backs," he said.