"Easter Can Be The New Christmas," British Minister Suggests

Housing Secretary Robert Jenrick said it was for people to make up their own minds but suggested that for some Easter (in April 2021) could be the new Christmas - especially those who were in high risk groups. 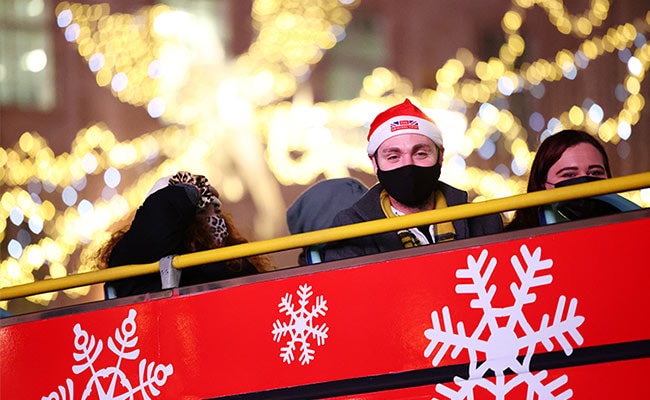 People sit on a tour bus as the spread of the coronavirus disease continues, in London.

Prime Minister Boris Johnson's government thinks people should make their own decision about meeting up for Christmas during the coronavirus pandemic, but given the risk some may want to wait for Easter to gather with their family, a British minister said on Wednesday.

After imposing the most onerous restrictions in British peacetime history, Johnson is keen to avoid becoming the prime minister who cancelled Christmas, even though the United Kingdom has the sixth worst official COVID-19 death toll in the world.

The government came under pressure on Tuesday to revise its plan to relax COVID-19 restrictions for five days around Christmas, with two influential medical journals making a rare joint appeal for the policy to be scrapped.

Housing Secretary Robert Jenrick said it was for people to make up their own minds but suggested that for some Easter (in April 2021) could be the new Christmas - especially those who were in high risk groups.

"How much do they want to bring members of their broader family together at Christmas or whether they think on this occasion lets just keep it small and we can meet up in the Spring - Easter can be the new Christmas for some people," he told Sky.

"It's not for government to tell people exactly how to handle this situation," he told the BBC.

Some families have said they will meet up no matter what the government decrees.

COVID-19 has battered the United Kingdom: The government's most conservative death toll measure is 64,908, second only to Italy in Europe, while government borrowing is set to hit a peacetime high of 394 billion pounds ($531 billion) in 2020/21.

Medical views are divided with concern growing among cancer specialists, for example, that many cancers are going undiagnosed due to the public health focus on COVID-19.

Cases are ticking up again in the United Kingdom, and particularly in London which went into the highest tier of lockdown from midnight.

The highest tier means that pubs and restaurants are closed, but shops are not. Still, revellers partied into the night in London's Soho ahead of the restrictions, Reuters photographers said. One woman sported large purple burlesque feather fans.

Johnson, who before he became prime minister in 2019 repeatedly railed against "the creep of the nanny state", has kept England under COVID-19 lockdown of varying severity for much of 2020, often to the dismay of some members of his Conservative Party.

But Johnson is keen to avoid cancelling Christmas for the first time since frivolous behaviour was outlawed in the festival under Puritan leader Oliver Cromwell during the 16th Century. Pro-Christmas riots broke out in response to the Puritan crackdown.

Scotland, Wales and Northern Ireland have their own policies.