The coalition government also wants to "lay the foundation for the next generation", especially on climate 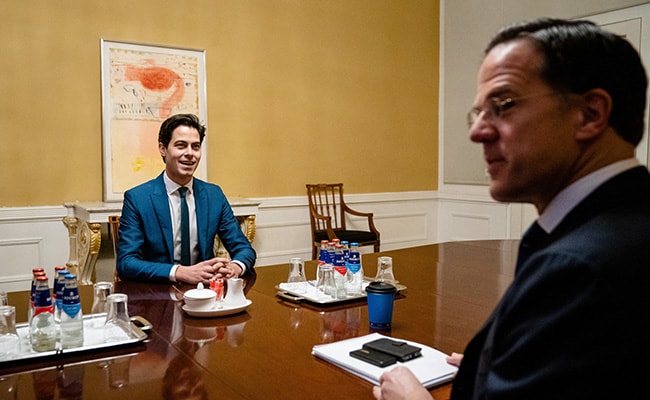 Dutch Prime Minister Mark Rutte's fourth successive coalition government will be sworn in Monday a record 10 months after elections, with pledges to spend big on climate change and coronavirus.

The new government will earmark a frugality-busting 35 billion euros ($40 billion) for climate measures as one of the world's lowest lying countries confronts the effects of rising sea levels, and will build two new nuclear power stations.

The new coalition also faces the immediate task of deciding whether record Omicron cases mean it should extend Europe's toughest Covid restrictions, which are due to expire on Friday.

Top jobs in the new government include Sigrid Kaag as finance minister, one of a record number of women in the cabinet, and her predecessor Wopke Hoekstra moving to foreign minister.

Dutch King Willem-Alexander will swear in the new cabinet from 10:30 am (0930 GMT) in the grand ballroom of the royal Noordeinde Palace in The Hague.

Rutte, 54, has vowed a fresh start despite the fact that he has been premier since 2010, making him the European Union's second longest-serving leader after Hungary's Viktor Orban.

Despite a record 271 days of negotiations after elections in March, the coalition also comprises the same four parties as the last government -- Rutte's centre-right VVD, Kaag's progressive D66, Hoekstra's centre-right CDA, and the conservative Christen Unie.

The Dutch have set another unwelcome record by being under a caretaker government for nearly a year, after the previous coalition resigned in January 2021 over a child benefits scandal.

Dubbed the "Teflon" prime minister for his ability to dodge scandals and stay in power, Rutte said in December he wanted his new government to "restore trust".

The bike-riding premier said the coalition also wanted to "lay the foundation for the next generation", especially on climate as around a third of the Netherlands lies below sea-level and it is heavily reliant on gas.

In addition to the 35-billion-euro climate fund over the next 10 years, the government will get its first climate and energy minister, Rob Jetten, 34, and has promised to make the Netherlands climate neutral by 2050.

The spending promises will however see Kaag leading the Dutch towards abandoning their traditional role as leader of the EU's austerity-obsessed "frugals".

Kaag, 60, a former diplomat, is also tipped to smooth ties with debt-hit southern European states that have previously been lectured by the Dutch to cut deficits.

Another key pledge of the coalition is to tackle a chronic housing shortage in one of the world's most densely populated countries.

Rutte is set to become the Netherlands' longest-serving prime minister later this year but he faces a number of political challenges, particularly over the Netherlands' partial coronavirus lockdown.

The Covid-sceptic, far-right politician Thierry Baudet has seized on an issue that has sparked violent rioting last year, and saw an anti-vaccination activist arrested for brandishing a burning torch outside Sigrid Kaag's house last week.

Dutch schools are set to reopen on Monday but all non-essential shops, bars, restaurants and events remain closed until at least January 14.