A sign offered to give customers a coupon if they reported employees heard shouting in a foreign language. 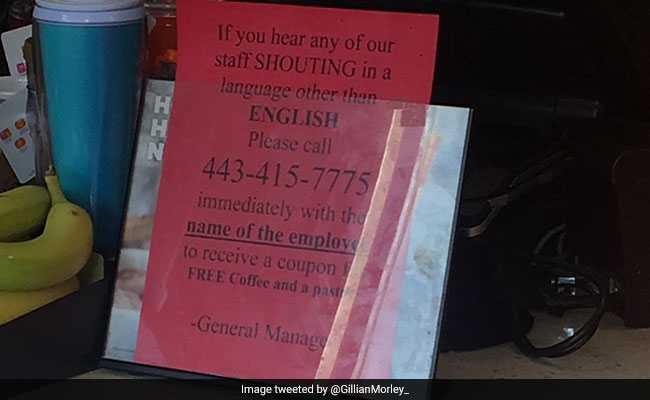 A sign asking customers at a Dunkin' Donuts store in Baltimore to report employees who were heard not speaking English has set off a controversy.

The sign, according to the Baltimore Sun, would offer coupons to customers who reported workers at a doughnut store on West 41st Street if they were heard yelling in foreign languages.

Views of the sign were posted on Twitter. It read, "If you hear any of our staff SHOUTING in a language other than ENGLISH Please call 443-415-7775 immediately with the name of the employee to receive a coupon for FREE Coffee and a pastry."

The sign was spotted Monday at the store and has apparently since been removed after it went viral on social media, according to the Sun and other media outlets.

Dunkin' Donuts told the Sun in a statement that the store's general manager put it up "based on her own personal judgment" to deal with a "customer service and satisfaction issue."

The store's franchise owner believed the sign was "inappropriate" and had it removed, the company said.

Promoted
Listen to the latest songs, only on JioSaavn.com
Dunkin' Donuts did not identify the franchise owner or the general manager.