Seen This Man's Viral 'Blinking GIF'? He Wants A Favour From You

You've seen Drew Scanlon's face - it's been a favorite on social media for years. People didn't recognize him in public, and he had never even used the GIF.

You've seen Drew Scanlon's face - it's been a favorite on social media for years.

He's "Blinking Guy," also known as "White Guy Blinking," the viral baffled-eyed GIF people use to indicate confusion, and also that they think someone is an ignoramus.

While the world has used his expression for fun and snark for years, Scanlon - who had nothing to do with making the GIF - generally stayed under the radar. People didn't recognize him in public, and he had never even used the GIF. Until a few days ago.

Scanlon, 33, who lives in San Francisco, sent out a tweet on Thursday saying he is, in fact, the Blinking Guy, and he asked the world for a favor.

"Hi Internet! I'm Drew and THIS IS MY FACE," he wrote. "If this GIF has ever brought you joy in the past, I humbly ask you to consider making a donation to the National MS Society. It would mean a lot to me and to those I know affected by the disease!

"I'd never used the meme before because I felt like I didn't own it," Scanlon said Sunday after he finished a 120-mile bike ride fundraiser for multiple sclerosis. "The Internet made it and found this funny way to use it."

He said he'd always thought it would be "not cool" for him to use the GIF, like a guy in a band wearing his own band T-shirt.

He also said it got so big on social media, it was "a little scary."

Drew Scanlon and Katie Bernstein during a break from the 100-mile bike ride fundraiser for multiple sclerosis. Bernstein was recently diagnosed with the disease. (Wayne Fan) 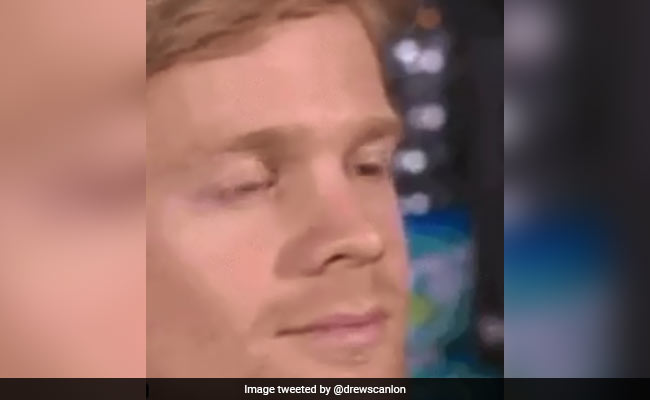 But he changed his mind last week as he was gearing up for the two-day ride in support of two close friends who have MS, one recently diagnosed. During the ride through Northern California, Scanlon updated his status when he took breaks, encouraging people to donate.

People responded with an outpouring of support, with many saying they were gobsmacked that Scanlon, whose profile picture doesn't mirror the wide-eyed, fresh-faced man in the GIF, was the Blinking Guy. One person wrote, "This is the best use of fame I've seen in a while," and others responded to Scanlon's announcement with - wait for it - his own GIF.

The GIF comes from a moment in 2013 when Scanlon was working for the gaming website Giant Bomb, and he and co-workers were streaming themselves on the internet as they watched and played a video game. A friend of Scanlon's made a bad joke, and Scanlon reacted with his now-famous blink.

Someone made it into a meme and sent it to Scanlon at the time, but he laughed it off and forgot about it.

It popped up sometimes over the next couple years, but in 2017 it suddenly was everywhere. Celebrities like Stephen Colbert and filmmaker Ava DuVernay used it, and Scanlon realized it had reached a tipping point when a friend told him that the friend's mother has used it on Facebook. 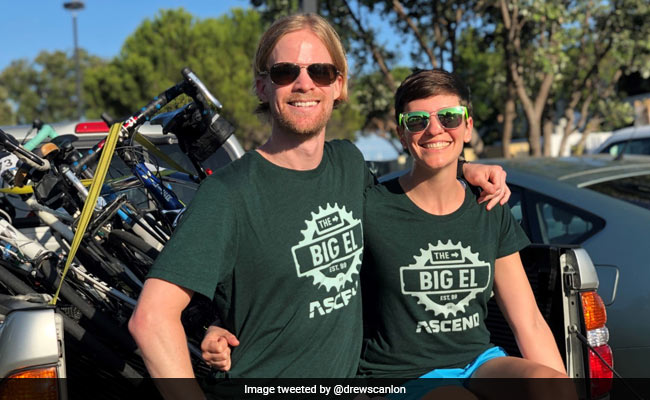 Drew Scanlon and Katie Bernstein during a break from the 100-mile bike ride fundraiser for multiple sclerosis. Bernstein was recently diagnosed with the disease.

Now, he said, sometimes when people first meet him and find out he's that guy, they'll ask him to blink.

"I feel like I can never do it correctly because it's not natural for me to try to re-create that moment," he said, laughing.

He said the fundraiser is the best thing to come from his prolonged and bizarre Internet celebrity. He did the bike ride with his friend, Katie Bernstein, 36, who was recently diagnosed with MS.

Bernstein's mother has had the disease for decades, she said. Bernstein said she's grateful for Scanlon's friendship, and also his notoriety.

"It feels really special to me that when my friend decided to step out into the world with 'That's me, that's my face,' he could have done it for personal gain," Bernstein said. "But he did it for me and MS."

(Except for the headline, this story has not been edited by NDTV staff and is published from a syndicated feed.)
Comments
Drew Scanlonblinking guymemes